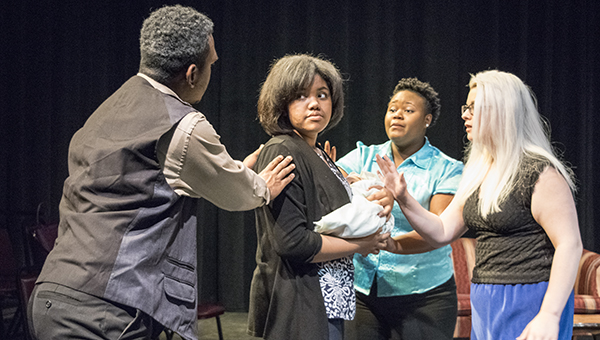 MSA Theatre is kicking April off with three showings of “The Winter’s Tale” by William Shakespeare. Preparing since January, the juniors and seniors are looking forward to sharing their passions with the public.

Angela Picarella, a senior from Picayune, said the process began with the theater students gathering around and reading the lines. Robert Brooks, MSA’s theater instructor, began asking the students what they thought the lines meant.

Brooks said there are really two language barriers when it comes to understanding Shakespeare. The first is because of the way language has evolved since Elizabethan times. The second stems from the fact that Shakespeare didn’t write the same way his contemporary audience spoke. He employed flowery language and frequent metaphors.

Picarella plays Mopsa, one of the Clown’s love interests. In her scene, she fights with Dorcus over the Clown’s affection. Picarella said one of the most interesting things about her character is that she and Dorcus are both only in that one scene, and yet they are named. Meanwhile, the Clown has a fairly large role and is not. She said when Shakespeare originally wrote the play he did not name the two women, but later went back and added in names.

“It makes you wonder why he did that,” she said.

Malone has several small roles, but her favorite is the Bear.

“I’m only in it for a couple seconds, but it’s so great,” she said.

Malone and Picarella both said the genre of the play is interesting because the first half feels like a tragedy, but the second half is much more comedic. Brooks explained “The Winter’s Tale” is in fact a romance. As an Elizabethan genre, romances are more serious like tragedies. The main difference is that a tragedy cannot end any other way than badly. Romances instead have happy endings.

Brooks said although the school does a play every year, they make sure to do a Shakespearean play every other year, allowing every student to participate in one before they graduate.

“He really was one of, if not the, greatest writers of all time,” he said. “He tells good stories. He creates characters that once you understand the play you see why they behave the way they do.”

Although most people experience plays in high school through reading the scripts, seeing plays performed is an entirely different perspective.

“It’s great to see all the different interpretations of the characters,” Jatavious Haynes, a junior from Batesville, said.

But the real magic will be once the audience files in Friday night.

“You can feel the energy of the audience, and it all brings together,” Picarella said.

For the audience, Brooks said the difference in reading a play and seeing a play is that reading is a private experience.

‘When you see it played out in front of you, the actors make different choices than the characters in your head,” he said. “It’s a shared experience. You might find something funny or more intense because other people are reacting around you.”

For Picarella, Malone and Haynes, coming to MSA was all about finding more people like themselves and learning responsibility.

“I love being in this environment where I’m able to take responsibility and learn independence and take initiative,” Malone said.

Picarella said it’s like attending a strict community college. They have freedoms and control over their schedules, but at the end of the day they’re still teenagers, and they have curfews and rules they are expected to follow.

“It’s a really great place because there’s all types of social backgrounds,” she said.

“Oh you like Korean dramas? So do I,” Picarella said. “MSA is the best thing for kids in Mississippi if you’re into the arts.”

Brooks said MSA allows students in Mississippi to have a great arts education even if their school doesn’t have a great arts program. Although some schools throughout the state have great programs, that is not the norm. Plus, at MSA they have the opportunity to get more arts credits than they could get otherwise.

“With more intense training, they are able to have a deeper understanding of the theater,” he said.

Because of student interest, the theater program focuses mainly on acting; however, they do teach directing, history of the theater, playwriting and set, lights and costume designs. For this play, the students were responsible for creating the majority of the set and costumes. 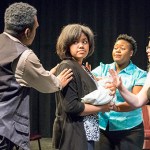 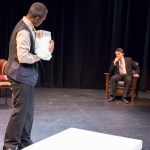 Leontes, background, orders Antigonus to take the baby away. 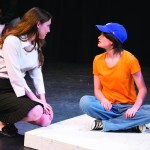 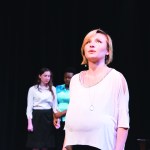 Hermoine is sent to prison by her husband, Leontes, after he suspects her of committing adultery with his childhood best friend, King Polixenes.