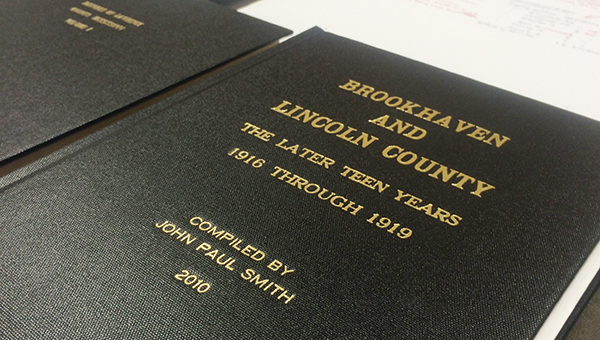 Photos submitted / “Brookhaven and Lincoln County: The Later Teen Years 1916 through 1919” is just one of several books John Paul Smith has compiled on the Smith families of Lincoln County.

There are Smiths everywhere, especially in Southwest Mississippi.

The Lincoln County Historical and Genealogical Society recently hosted a program with information about the history of the different groups of Smiths in Lincoln County and how they got there.

“All about those Smiths” took place at the First Baptist Ministry Center.

According to Smith’s research, most of the Smiths in Lincoln County can be traced back to the Smiths that settled in Jamestown, Pennsylvania, in the early 1600s. This lineage allows the Smiths to trace their ancestry back to Capt. John Smith.

In 1653, the Smiths helped establish the earliest settlement in North Carolina, and in 1670, they did the same in South Carolina.

After the Revolutionary War ended in 1783, the Smiths migrated to Georgia and lived there from 1790 to 1810, all while beginning to move westward into the South. Those settlers are called the Nathan Smith Settlers, and records indicate that the two sets of Smiths in Lincoln County are related to them.

“John Paul Smith was very interesting and was a wealth of knowledge on the Smith families of Lincoln County,” historical society member Tammie Brewer said. “A good crowd came out to hear the program and learn more about their ancestors.”

“John is 86 years old and one of the most knowledgeable people on Lincoln County history, particularly in the genealogy of the Smiths,” Historical Society Program Chairman Homer Richardson said.

“John did a great deal of work and put together a whole bunch of charts for this presentation,” Richardson said. “It was also part of his way of turning this material over to the historical museum. He decided to turn over all of his research to the museum so other people can use it for their own research.”

Curiosity about why a family settled in a certain place and what happened to a certain person is what draws people’s interest to the information Smith presented, Richardson said.

“People are curious how their family and ancestors ended up here,” Richardson said. “What made them decided to stop here. Many of the Smiths came over from Franklin County, Georgia, and are Scotch, Irish and English descendants. They came in the early to mid-1800s and settled all over Lincoln County.”

Anyone interested in reading the research Smith compiled is welcome to view it at the Lincoln County Historical Museum.

The historical society’s next program will be April 21 at 6:30 p.m. at the Jimmy Furlow Senior Citizen Center. Lynn Richardson, Carroll Montgomery and Harrell Montgomery will present the program, “So, you like to hunt and find old stuff and other treasures. 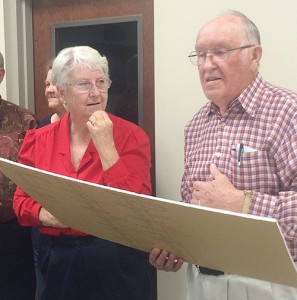