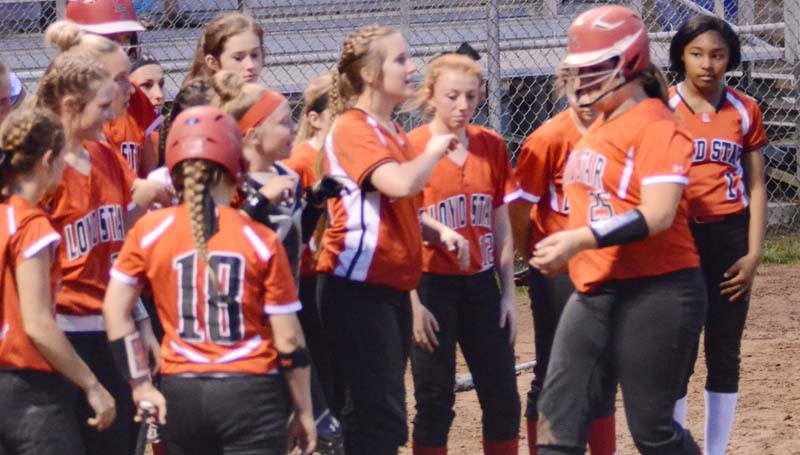 Daily Leader / Marty Albright / Loyd Star’s Ali Gartman is greeted at plate home plate by her teammates after hitting a solo homerun in the fourth inning against Brookhaven Thursday night.

“This was a good defensive battle until the very end,” said Loyd Star coach Jan Delaughter. “The girls did a good job fighting to stay in the game. They did not quit and managed to find a way to collect the win at the end.”

The Lady Hornets (7-4, 3-1) will continue action today as they visit Bogue Chitto to battle the Lady Cats. Junior varsity action begins at 5 p.m., followed by the varsity game at 6:15 p.m.

The Lady Panthers (10-4, 1-0), coached by Mandy Vinson, are scheduled to be in action today when they host the Wesson Lady Cobras. Junior varsity action is set to start at 5 p.m., followed by the varsity game at 6:15 p.m.

The Lady Panthers got on the scoreboard first when they pushed across one run in the opening inning to take an early 1-0 lead.

The scored remained unchanged until the bottom of the fourth, when Loyd Star senior Ali Gartman smashed a solo homerun to tie the game at 1-1.

In the top of the sixth, Brookhaven reclaimed the lead at 2-1 after scoring Macy Ziskin from third base.

In the bottom of the sixth, Loyd Star battled back to tie and then captured its first lead of the contest at 3-2 after scoring Meagan Norton and Ali Gartman.

In the top of the seventh, the Lady Panthers threatened to plate a run, but the Lady Hornets kept Brookhaven from advancing and secured the win.

“Both teams played a really good game tonight,” said Vinson. “Our girls played a full seven innings tonight and things just didn’t fall our way. We were aggressive and hustled. I’m proud of the effort we gave. Good thing about tonight is we get to turn around and play again tomorrow.”

Makenzie Smith was the winning pitcher for the Lady Hornets with six strikeouts and two walks.

Katherine Shell suffered the setback on the rubber for Brookhaven with five strikeouts and three walks.

Gartman was the top leader at the plate for Loyd Star with a solo homerun. Johnna Norman provided a single.