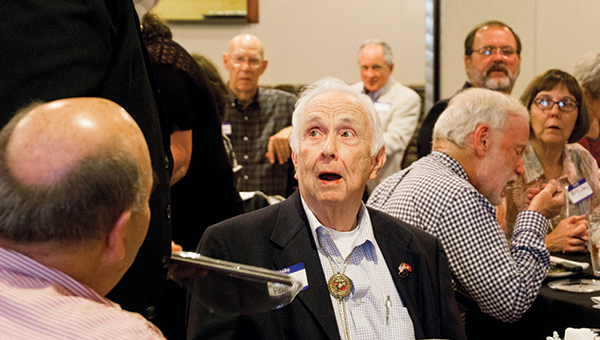 The evening began with a dinner and musical entertainment by Bob K. Smith and Nikki Fortson, who individually performed several songs.

“He’s a member of the club, but with his age and his health, it has not allowed him to be with us very much anymore,” Fortson said. “There are not a lot of people that can be in an organization and be active and come like you do.”

First Vice President Brooks Hall presented an award first to Helen Anderson and then to Leigh Ann Martin in recognition of outstanding service, loyalty and dedication to the club.

“Our last award is to go to our current president in sincere appreciation and recognition of outstanding club leadership and dedicated service as the president, and I will say he has been one of our more enthusiastic members,” Hall said. 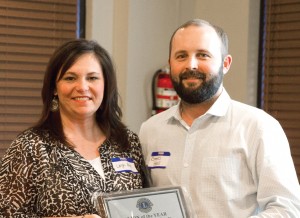 Fortson ceremoniously recognized 80 years worth of club presidents by taking a moment of silence and ringing the Lions Club bell eight times.

“On the back of the book tonight, you see all the men and women that have been presidents since the founding of the club in Lincoln County,” Fortson said. “There have been 80 people that have stepped forward and become presidents for the club and did what they thought, regardless of what it was, was best for the club. If you’re not doing anything, then you’re stepping back.”

The evening concluded with speeches from both Blair and Talley. Blair presented photographs and facts about the 28 founding Lincoln County Lions Club members.

“We actually have the original charter night program in the library archives,” Blair said. “Several interesting things about the charter night was the actual event started at 7:45 in the evening. We were sponsored by the Jackson, Mississippi Lions Club.”

Blair walked through the charter night program and several photographs, identifying members in them.

Talley spoke to the group about increasing membership to keep diversity within the club, and on the upcoming state convention this summer.