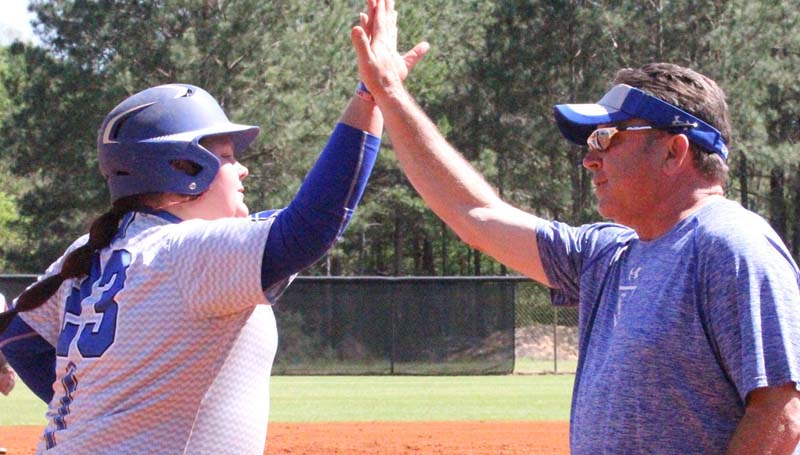 WESSON – The Co-Lin Lady Wolves plated a staggering 33 runs in a doubleheader win over the Coahoma Lady Tigers Saturday. Both games ended in five innings as the Lady Wolves took game one 16-0 and the second game 17-0.

After a quick three-up three-down top half of the first inning, Co-Lin knocked in nine runs in the bottom of the inning to take a commanding lead.

The Lady Wolves plated three more in the bottom of the third to take a 12-0 lead. In the bottom of the fourth, Co-Lin added four more runs highlighted by Jessica Crum’s three-run home run that scored Katie Grace Culpepper and Lauren Brashier extending the lead to 15-0. Kamry Creel drove in Jamie Martin for the final run of the game.

Absorbing the loss was Shanico Morris who allowed 13 earned runs on 17 hits and walked five.

Crum led the Lady Wolves 17-hit attack going 4-for-4 with a home run, double and a pair of singles for four RBIs. Creel added three singles and an RBI. Kamryn Vanlandingham had a triple and a single (1 RBI). Jamie Martin had a double and a single (1 RBI). Brashier (2 RBIs), Madison Hyde (1 RBI), and Culpepper (1 RBI) added a pair of singles apiece.

Jacarra Hillie, Ann Jones, and Destiny Hatten led Coahoma with one hit each.

The Lady Wolves continued their hot hitting in game two as they drove in seven runs in the first inning.

Co-Lin added nine more runs in the second inning highlighted by Jessica Crum’s second home run on the day, a grand slam to center field. Dianna Hobgood followed with a solo shot to put the Lady Wolves up 16-0.

Hobgood added her second solo home run in the game to give the Lady Wolves the 17-0 win.

Crum led the Lady Wolves at the plate with a grand slam and a double for four RBIs. Hobgood had two home runs and a single for two RBIs. Mattie Avants had a double and a pair of singles for two RBIs. Trevlyn Scott doubled and singled (1 RBI). Lauren Brashier doubled and singled (1 RBI). Kamryn Vanlandingham tripled for two RBIs. Katie Grace Culpepper had a pair of singles for an RBI. Also hitting safely were Greta Carley and Kayla Britt (1 RBI).

Scott and Brashier combined for the shutout. Scott picked up the win scattering four hits and striking out three in four innings of work. Brashier tossed the final hitless inning.

Starter Shunekqua Mungon suffered the loss for the Lady Tigers giving up five earned runs on two hits and walking five. Shanico Morris relieved Mungon in the first inning. She allowed 12 runs (6 earned) on 15 hits and struck out one in four innings.

“We got to rest some players today, as everyone got plenty of playing time,” said Lady Wolves head coach Allen Kent. “Our pitchers did a good job working ahead in the count. We have four tough division match ups left, and these next two weeks are really big as far as playoff implications go. We have got to turn it up a few notches.”