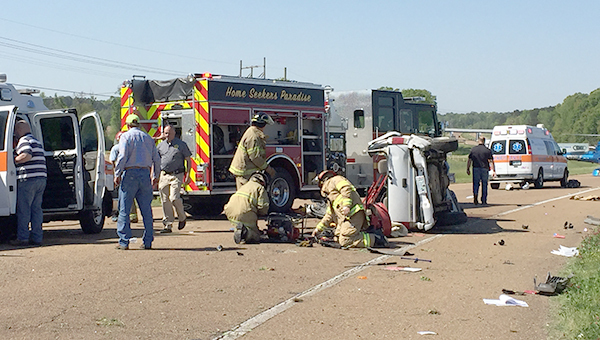 The Brookhaven Police Department responded to an accident involving two vehicles at 10:26 a.m. on Hwy. 84.

Police Chief Bobby Bell said a grey 2013 Chevrolet traveling east on Hwy. 84 tried to turn on to Natchez Avenue and clipped the rear end of a white 2000 GMC Jimmy that was traveling west on Hwy. 84. Upon impact, the GMC flipped multiple times, Bell said.

The male driver was ejected from the GMC and the jaws-of-life were needed to remove the female passenger, Bell said. Bystanders rescued a 3-year-old boy, who suffered minor injuries, from the back seat of the car, he said.

Two helicopters transported the male and female to the University of Mississippi Medical Center in Jackson with critical injuries, Bell said. The driver of the Chevrolet did not suffer any injuries, he said.