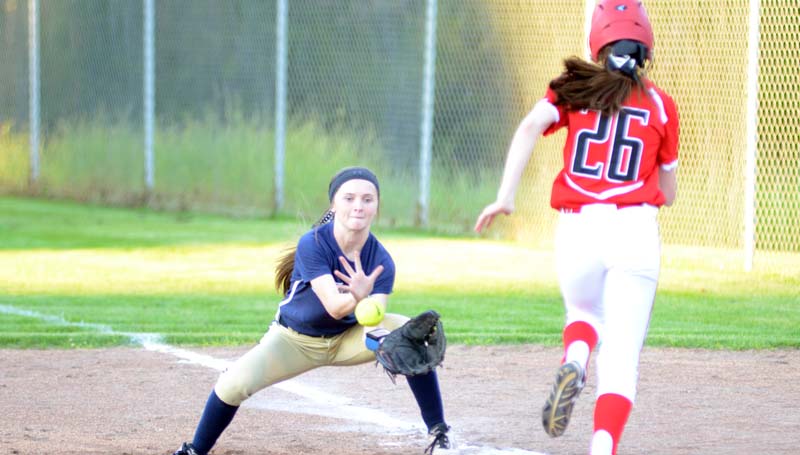 “Good game,” said BC coach Scott Leggett. “Both teams put the bat on the ball. We did a great job pitching our way out of some tough innings to collect the win against a very good team like Loyd Star.”

The Lady Cats (13-3, 2-0) will continue action today when they visit Walthall County to battle the Salem Lady Wildcats. Junior varsity action begins at 5 p.m., followed by the varsity game at 6:15 p.m.

The Lady Hornets (9-5, 2-1), coached by Jan Delaughter, will also be in action today when they host division rivals, the Prentiss Lady Bulldogs, for a varsity double header. Action starts at 5 p.m.

Bogue Chitto captured an early 3-0 lead in the first. In the third, Loyd Star managed to break through to score its first run, but BC would answer in the fourth to regain a three-point lead.

The Lady Hornets plated a run in the fifth inning to close in the gap at 4-2.

In the seventh, Loyd Star senior first baseman Ali Gartman hit a solo homerun to cut into BC’s lead at 4-3, but BC denied Loyd Star’s rally attempt to collect the victory.

“We didn’t play a complete seven inning contest,” said Delaughter. “Bogue Chitto has a very good team and we need to play our best all the time to beat a team like them. Offensively, we were not very productive at the plate and we left too many runners on base.”

Codi Leggett collected the win with one strikeout and one walk. Alana Nettles (1K, 1BB) and Christian Black (4K, 0BB) both pitched two innings in relief.

Makenzie Smith absorbed the setback on the rubber for Loyd Star with six strikeouts and no walks.

Black was the offensive leader at the plate for BC with two doubles. Zariah Matthews contributed two singles. Hitting safely were Terrah Nelson and Nettles.

Gartman was the top hitter for the Lady Hornets with a homerun and a single. Makenzie Smith had two singles. Meagan Norton and Madison Jones hit a single apiece.

Payton Barron and Stevie Montgomery directed the Lady Cats’ hitting with a single each.