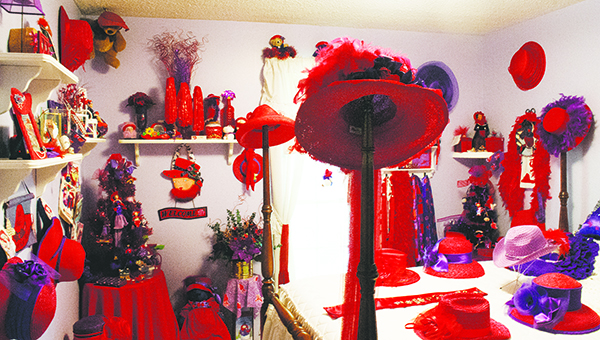 Photos by Aaron Paden / The Red Hat Room at in Linda Tucker’s home — a collection of gifts years in the making.

“When I am an old woman I shall wear purple / With a red hat which doesn’t go, and doesn’t suit me. / And I shall spend my pension on brandy and summer gloves”

The 1961 poem “Warning” by Jenny Joseph inspired a movement. April 25 will mark the 18th anniversary of the foundation of the Red Hat Society. In 2001, Brookhaven local Linda Tucker started her own chapter in the halls of Countrybrook Living Center, where she worked at the time.

The rules are simple. Women over 50 don a purple dress with a red hat. On the first Thursday of every month, the women of the Brookhaven Red Hat chapter get together for an adventure.

“We don’t do fundraisers,” said RHS member JoAnne Herrington. “We don’t do socially conscious things at all. We paid our dues. We have fun.”

They’ve toured the churches in Port Gibson. They’ve been to Natchez and Jackson, New Orleans and the Coast.

Tucker said membership has changed over the years.

“The very first group we had were made up of RNs, LNs and residents of Countrybrook,” Tucker said. “They had a heart for people.”

Tucker said they would go to the various living centers around Brookhaven and encourage women to have their own Red Hat groups.

After awhile, Tucker approached women of her church to join.

“From there, we went to visit shut-ins in their home, blowing bubbles at their front door,” she said.

RHS members on Thursday visited Chism’s Diner for the first time. One member said, to the agreement of everyone sitting around one of Chism’s big round tables, that fellow chapter members were like sisters.

“We have had a lot of fun,” Tucker said.