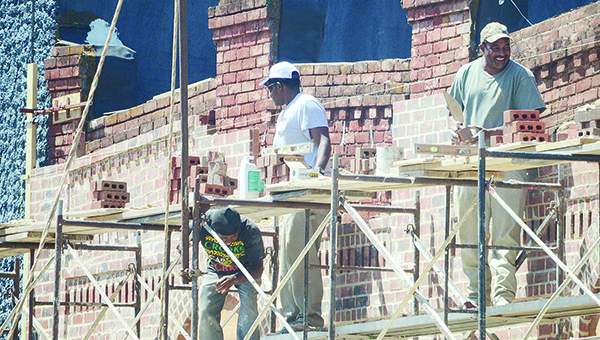 Photo by Luke Horton / Bricklayers work to restore the outside of a downtown building. This is just one of the many renovations that entrepreneurs are funding in Brookhaven.

Brookhaven residents traveling down South Whitworth Avenue or West Cherokee Street will notice several buildings undergoing renovation. This is a continuation of efforts by several individuals years in the making.

“The reason it’s important is because we’ve found if you look at any vibrant small town, the vast majority of them have a vibrant downtown,” Doremus said earlier this year. “Many times the city will go as the downtown goes.”

To keep downtown vibrant, local entrepreneur Terry Pappas said he, Johnny Lynch and others have been working to renovate properties around the area. 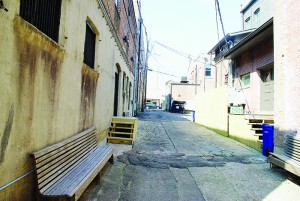 Photos by Aaron Paden / Seating and lights have already been placed in the alley behind Lemanedi Arts and Interiors, but there is still plenty of work left to be done.

One example is what Pappas is calling The Alley Project. Behind the stores on Whitworth and intersecting with West Cherokee is an alley way, including a parking lot behind Fred’s.

“Fred’s owns this parking lot,” Pappas said. “A lot of people don’t realize that. They think the city owns it. Every bit of this is private property, and that’s the city’s stance.”

Behind Fred’s is Lemanedi Arts and Interiors, an event venue where author Jimmie Moomaw recently attended to preview her new book, “My Backyard Was The A&P Parking Lot.” There are 75 parking spaces there, and work has already begun on paving the walkway, adding furniture and hanging lights along the roof. 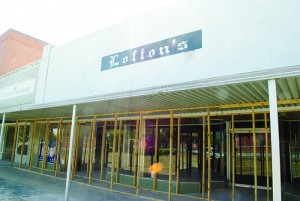 “I’d say in about a year and a half or two years, you’ll notice a major difference,” Pappas said. “If not a year.”

Georgia Blue, a relatively new restaurant with four locations around the state, is building a new bakery on Whitworth — a new place for patrons to sit down and grab a cup of coffee or a pastry. Pappas said Matt Fitzsimmons is also working on a restaurant on Whitworth.

“We’re very excited about his restaurant coming,” Pappas said. “He’s doing a really good remodeling job himself, restoring the building back similar to what it was.”

Next to that, of course, is the Lofton’s building, Pappas’ own renovation project, which he said could cost as much as $1.5 million to complete.

“I’m planning on doing 12 apartments in there and three commercial spaces,” Pappas said. “The apartments on the back side will have balconies. They’ll come out pretty far, and they’ll all be covered.

“We’ll have a small art gallery. Those front windows will be for art, so people can put their art in there, and we can sell it for them,” Pappas said.

While the two blocks south of East Monticello Street have seen major renovations, properties to the north have not.

“Pretty much they’ve always looked at the downtown as just these two blocks, but that’s not true,” Pappas said. “Downtown consists of the other side of Monticello Street, too. They just kind of ignore that end of the street, and we hope to change that. There are a lot of old houses from the 1800s down there, and there’s a lot of cool buildings down there as well.”

Some of those buildings have been abandoned for some time. The old hospital on the corner of North Jackson and West Congress, originally built in 1922, is something of a historical landmark in the town. But the windows are also shattered, and there have been concerns that it may contain asbestos.

Pappas said he does hope to push development north of Monticello Street.

“Myself and a couple of other gentlemen are working on a project to encompass those things,” Pappas said. “I can’t really go into details right now because it’s just come about real recently. I think if we’re successful in doing what we want to do, then we’ll push that way and we’ll push that way with some major things.”

To accomplish all of these renovations, Pappas said local businesses need the support of community members, but business hasn’t risen to expectations for 2016.

“The major thing is the oil and gas,” Pappas said. “Southwest Mississippi is dependent on oil and gas. There’s so many people laid off here. A lot of young men will get out of high school, they’ll go to that Southwest Mississippi Community College, and then they’ll go offshore making a very good wage. Well it’s hard for them to do that right now. So many people are laid off. It has affected our economy tremendously.”