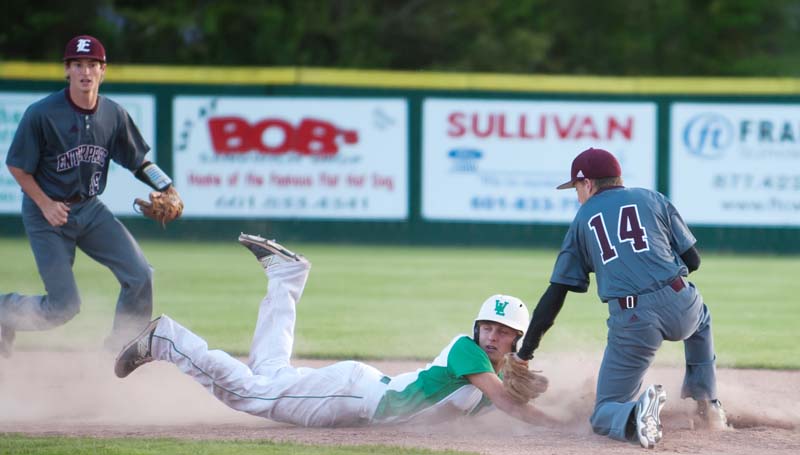 “Austin Fugler pitched a great game,” said Enterprise coach Cass Brister. “He managed to keep West Lincoln off balance at the plate all night. Defensively, we played really well behind him. Offensively, our approach was much better. Hopefully we will build off of this game and continue to improve heading into the last week of district play.”

The Jackets (10-4, 6-2) will continue division play Tuesday when they host the Prentiss Bulldogs. Junior varsity action begins at 4:30 p.m., followed by the varsity contest at 6:30 p.m.

The Jackets claimed a lead in the first, plating two runs on singles by Hunter Richardson and Cade Cangemi.

The Jackets tacked on another run in the second on a single by Brady Watts. The Bears held the Jackets scoreless in the third, but Enterprise caught fire in the fourth, scoring four runs and adding five more runs in the fifth to secure a 12-0 lead.

“We did not come to play tonight and Enterprise did,” said West Lincoln coach David Gilbert. “It was a tough game to be a part of because my guys was not there and it showed in the score. Again we had a game full of errors, giving up eight unearned runs. No team will win with a defense that gives that many extra outs. I do have to give credit to Austin Fugler, who kept our hitters off balance all night and he threw a great ballgame for Enterprise. Our guys have to compete and we did not do that tonight.”

Austin Fugler had a solid night on the mound for Enterprise. He recorded the victory with 11 strikeouts, three walks and allowed only three hits.

Cangemi directed the Jackets at the plate with two singles and four RBIs. Richardson, Watts, Tanner Waldrop, Landon Gartman and Max Miller each collected a single.

West Lincoln was forced to use three different pitchers. Seth Bivens started on the mound and completed 3.1 innings, allowing four hits, three walks and had three strikeouts. Kylar Field relieved Bivens on the mound for 1.2 innings of action. He collected one strikeout and gave up three hits and four walks. Lofton Sills finished out the game giving up one walk.

West Lincoln was led at the plate by Austin Burris, Lofton Sills, and Gabe Nations with a single each.