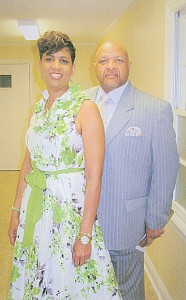 Hamilton began his tenure with Mt. Wade in 2002, bringing with him tools, like his leadership skills, educational background, intensity in delivering the word through preaching and teaching and a spiritual vision, to help with the growth of the church.

Hamilton has made improvements within the church during his time at Mt. Wade. Church ministries have grown larger and been strengthened as Hamilton has encouraged members to get involved. Wednesday night Bible classes have been revamped to add more teachers in order to accommodate more students.

The Mt. Wade children’s church has grown with Hamilton’s help. It has been added to the second and fourth Sundays, and has proven to be a great success.

In addition, there have been three ministers – Rev. Zachary Bryant, Rev. Tedric Thompson and Rev. Davion Brown – who accepted their calling under Hamilton.

Hamilton believes in being prepared to do the work God has called him to do. He involves himself in workshops and conferences in and out of the state. Mt. Wade’s objective is “To evangelize sinners, edify saints and exalt the Savior.”

He is married to Zandra Moody Hamilton and is the father of Alex’Zandra Patrice and Phillip Randoph II.

Hamilton’s mission, along with the Mt. Wade congregation, continues to be “Ministering to the total need of man.”

Several accidents were reported on Lincoln County roadways Thursday — a total of 11 vehicles were damaged and two people... read more