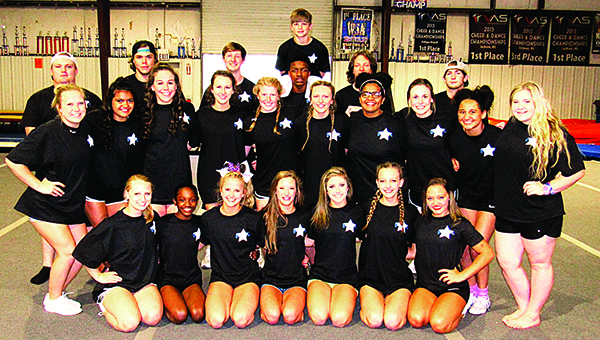 Photo submitted / The Gym of Dreams “Eclipse” team will be traveling to Orlando to compete in Worlds this weekend.

A group of cheerleaders from Gym of Dreams in Brookhaven will have the opportunity of a lifetime this weekend.

Team “Eclipse” was chosen as one of 300 teams in the world to compete at the United States All Star Federation Cheerleading World Championship at Walt Disney World Resort in Orlando, Florida.

Gym of Dreams coach and owner Duane Meilstrup said 24 students will travel to the competition to perform on Saturday, and if they do well enough the team will perform Sunday.

“We will get to Orlando on Thursday, practice on Friday and compete in the preliminaries on Saturday,” Meilstrup said. “Only 10 teams from our preliminary round make it to the semifinals.”

If the team makes it past the preliminary round and to the semifinals, it will meet up with a whole new set of competition on Sunday, Meilstrup said. The top 10 teams from the semifinals then go on to the finals, he said.

“Eclipse” has been practicing since the beginning of June and created its world championship routine with the input of each member, Meilstrup said.

“We have a really young team,” Meilstrup said. “We kind of had a rocky start, but the team as a whole and each individual have developed their skills. They have improved greatly since the beginning and developed themselves in a short amount of time. We are just blessed that it all came together.”

The team has competed in five events since June, one of them being in Houston, Texas, where it earned its bid to compete in the world championship.

“World is a big competition,” Meilstrup said. “Only level five and six teams perform in the world championships. It’s just a huge honor for us to make it. There have only been four different gyms from Mississippi to ever make it to world. This is only our second time to make. It’s where the best of the best go to compete and definitely the biggest goal of the sport.”

Meilstrup said when the team returns, Gym of Dreams will hold tryouts on May 1 to pick the new teams for the 2016-2017 competitive year. For more details on tryouts, call the Gym of Dreams office at 601-833-6451.

A 20-year-old man was arrested Tuesday in the armed robbery of a convenience store at 718 W. Congress St. The... read more