CAC talks to students about abuse 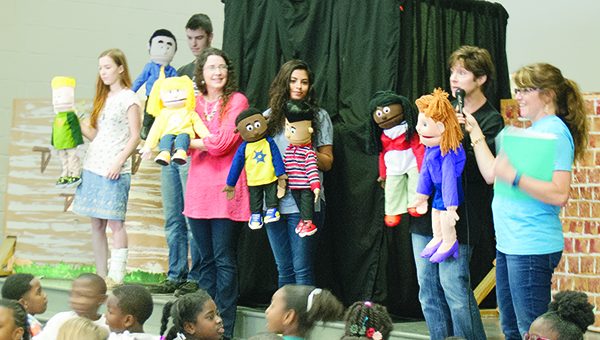 Photo by Aaron Paden / Mamie Martin Elementary School students watch Thursday as Southwest Mississippi Children’s Advocacy Center puts on a puppet show to educate them about the types of child abuse and how to report it.

“We don’t want to tell you this to scare you,” CAC Outreach Coordinator Trisha Artigues told children at the event. “The first thing I want you to remember is that there’s no excuse for child abuse. That means it’s never OK for any adult to hurt a child. There’s no reason that makes that OK, and it’s never the child’s fault.

“The second thing is abuse usually happens to someone known to the child. There’s hardly ever just a stranger that hurts a child. That’s a really important thing to remember, because a lot of times kids don’t understand that someone who they maybe trust and love would hurt them, but that does happen sometimes. The last thing that I want you to remember, and this is really important, is that if something like this ever happened to you, it’s OK to tell.”

The puppet show emphasized talking to adults about instances of abuse and bullying, and they were well received by the children.

“I love the puppets!” one child said as the presentation ended.

According to CAC Executive Director Kim Walley, one in eight girls and one in 10 boys suffer from abuse or neglect in their lifetime. Most often, this will come from an adult known by the child.

“A lot of children that have suffered from abuse will solitude themselves,” Walley said. “They close up. There’s anger outbursts. There’s covering up, not wanting anyone to bath them or look at them. Grades go down often. There’s abnormal bed wetting that may start.”

Walley said sometimes children that have been abused will act out sexually, but often there’s no obvious signs.

“Some kids, especially the older ones, they’re very good at hiding it, so it’s very hard to see sometimes,” she said.

CAC provides on-site therapy for children who have experienced trauma. Walley said she hopes to hire a therapist in Lincoln County to shorten travel times for children as well. When abuse is suspected, CAC conducts interviews for law-enforcement.

“When they come in, they get to play,” Walley said. “They’re comfortable and we ask open-ended questions. We don’t coerce at all. We just give that child a chance to feel safe and tell their story.”

City may get funds for new station

A bill passed by state lawmakers could help Brookhaven replace an aging fire station on Willard Street. “Over the weekend... read more