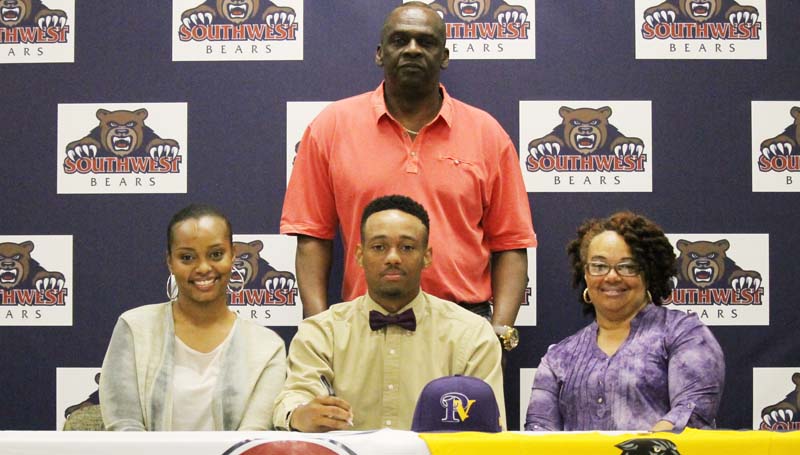 The collegiate career of Southwest outfielder Steven Williams will not end with his team’s last game this season. Williams has signed a scholarship to continue that career with the Panthers of Prairie View A&M.

A Summit native and graduate of Brookhaven Academy, Williams has been a member of the Bears’ squad for two years. He is currently batting .354 with 10 doubles and a homerun, 16 runs batted in and 19 runs scored. He has an on-base percentage of .413. His slugging percentage is .485 and his OPS percentage (on base+slugging) is .898.

Williams said he chose Prairie View because “they came to me (and) I was really intrigued about the things they have going on and all the new things that are coming. They’re rebuilding and I just feel like I’ll really be able to contribute to the team.”

Another factor in his decision, Williams said, was the fact that “I have family over there so it’s not like I’ll really be going too far (from home). I feel like it’s a good move for me.”

Williams said his time at Southwest “was fun. It was a big learning experience. The coaches helped me a lot to improve my game and I just enjoyed being here in my hometown and contributing to the team.”

Bears’ head coach Ken Jackson said, “We’re very excited to have Steven move on to Prairie View. The idea that he’s a Division 1 signee is very exciting for our program.”

“He’s really developed over the last two years,” Jackson said. “He’s gotten bigger, faster and stronger (and) he’s hitting for some power now. Last year, he did not have an extra base hit. He’s just developed into a really good ball player and I look forward to seeing him develop even more (over) the next two years.”