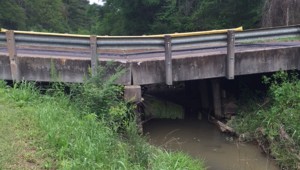 A bridge on Williams Street partially collapsed Tuesday morning while contractors were paving the street. No one was injured.

County engineer Ryan Holmes told the Brookhaven Board of Aldermen about the bridge at Tuesday’s board meeting.

“We were paving on Williams Street, like we have been for the last two weeks,” Holmes said. “I got a call mid-morning that some bridge damage had occurred. The paving machine and a loaded dump truck were crossing the bridge when the pilings crushed from the weight. It dropped the bridge approximately three to four feet. It could have been a lot worse. It obviously scared the people that were there, but fortunately, no one was hurt.”

The bridge is part of the Mississippi Local System Bridge Replacement and Rehabilitation Program, which tracks the state’s approximately 11,000 county and locally owned bridges to determine the need to repair and replace them every year.

“The bridge was posted as being in good condition the last time we inspected it,” Holmes said. “We were not planning on having to replace this bridge.”

“We look at the bridges at the same time every year, take thorough pictures and do a report,” Holmes said. “We have to send it to the state and they actually send it to the federal highway administration. Federal highway pays for the repairs. They send the money back down through the states and it eventually reaches the local level. This bridge was not on the list, but there is a trend. If you look at timber bridges, they’ll start declining over time.”

“The bridge was inspected last fall and it was in adequate condition,” Holmes said. “We’ve got very specific methods on how we have to inspect timber bridges. We have to tap them and sound them. At the end of the day though, it’s a piece of wood. It’s highly flexible. The company doing the paving was not negligent in the truck weight limit crossing the bridge because we did not have it posted under a certain weight.”

Holmes and Mayor Joe Cox stressed the importance of fixing the bridge and reopening it as soon as possible.

“We’ve got a couple of options on how to fix it,” Holmes said. “One would be to lift the bridge up, re-drive some timber pilling and set the bridge back on it. Timber is just not a good permanent fix though — it’s just a Band-Aid. Keith (Lewis) and I discussed it, and that’s not really the approach we felt that we should take. What we typically do in a situation like this is, we drive steel pilings and we encase anything that is above the water level in concrete, and then we put the bridge back on top of those. That is a permanent fix that I recommend.”

Holmes presented bids of two bridge contractors in Brookhaven who had surveyed the damage. The board awarded the bridge repair bid to S&S Dragline Services for $57,450.

Shelter must open for severe weather

Lincoln County Emergency Management Director Clifford Galey recently presented the Brookhaven Board of Aldermen with a plan that outlined the... read more