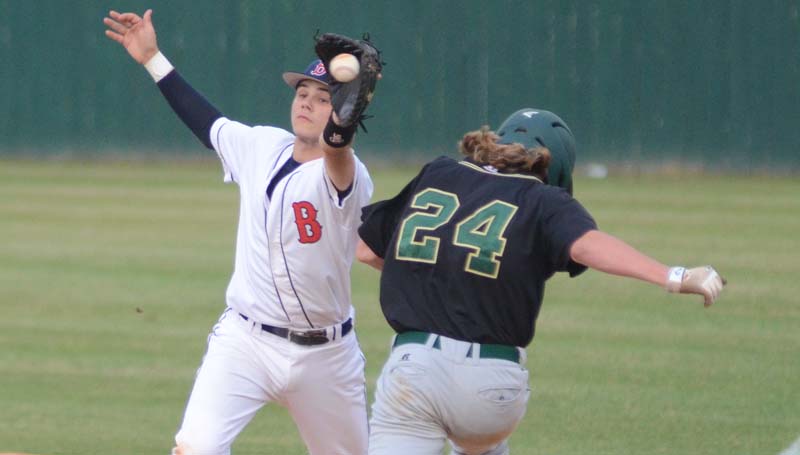 The Brookhaven Panthers dropped the first game of a best-of-three series with West Jones 13-2 in the second round of the Class 5A playoffs Friday.

The Panthers (10-14) were scheduled to battle the Mustangs (22-8) in the second game of the series Saturday at West Jones, but due to severe thunderstorms the game was postponed until Monday at 4 p.m. The third game, if necessary, will return to Brookhaven Tuesday.

“West Jones has a very good and solid team,” said Brookhaven coach Randy Spring. “Our youth showed up in spots during the game and West Jones did a good capitalizing on our mistakes. Overall, I was very pleased with my guys’ efforts. They fought hard and competed throughout the whole game.”

West Jones scored one run to grab a lead in the first, but Brookhaven roared back in the bottom of the inning, scoring two runs to take over the lead at 2-1. 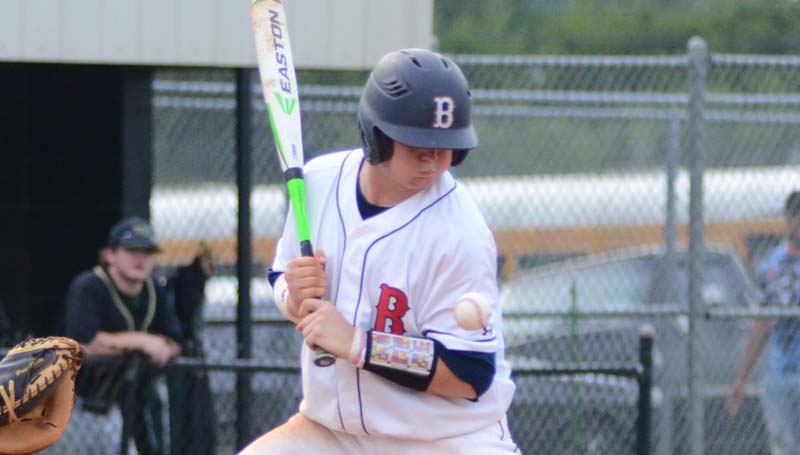 Daily Leader / Marty Albright / Brookhaven catcher Jacob Porter takes one on the arm to get a free walk to first base Friday night at Moyer Field.

The Mustangs took control of the game in the second, plating seven runs. They were led by a two-RBI single each by Ryan Lowe and Hudson Harris.

Brookhaven committed five errors in the game, while West Jones had two.

Rob James went the distance on the mound for West Jones to collect the win with two strikeouts and five walks.

Brookhaven used a five-man rotation against the Mustangs. Tate Walley started for the Panthers and suffered the setback with no strikeouts and one walk in 1.1 innings of action. Chase Owens (0K, 0BB), Tyler Mixon (1K, 2BB), Reese Reynaud (1K, 1BB) and Coker Wright (0K, 0BB) all pitched one inning in relief.

“Our guys pitched well against a veteran team,” said Spring. “Tate Walley was our starting pitcher and he gave it a go for us with a sore arm, but we ended up pulling him to avoid hurting him more. I am proud of Walley’s effort.”

Brandon Henyard was the top hitter at the plate for the Panthers with two singles. Darrian Wilson and Clint Stephens provided a single each.

Jacob Bullock powered the Mustangs with a homerun in the sixth inning. Ryan Lowe contributed a double and a single. Gabe Rayner and Evan Bynum provided a double each. Hitting safely for West Jones were Dustin Dickerson, Will McCoy, Hudson Harris and Rob James.