Brookhaven Elementary School student Wyatt Scott loves to read so much his teacher often runs out of books.

“I can’t keep enough books for him,” Jennifer Bray said about the fourth grader. “He has read almost every series I have in my classroom, and I am constantly looking for new books for him.” 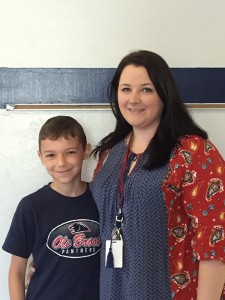 Brookhaven Elementary School will recognize students who reached their accelerated reader goals with a celebration during the week of May 16. Scott, a fourth grader who earned 1,012 accelerated reader points so far this year, will also be recognized.

In the spring semester Wyatt went from 700 points to 1,000 after he realized how close he was to accomplishing his goal of reaching more than 1,000 points, Bray said.

“When I realized how close I was getting, I decided to just shoot for the moon and get 1,000 points,” Wyatt said.

Wyatt said he reads all of the books on his own, but his parents encouraged him tremendously.

“His parents are extremely supportive,” Bray said. “They take him to the local library to get books that the school library and my classroom library do no have.”

At one point during the semester, Wyatt had a little competition from a fellow classmate who also had 700 accelerated reading points, Bray said.

“I shot out of the gate ahead of my competition when I set my AR goal,” Wyatt said.

“At night, after I am supposed to go to bed, I read with my headlight,” Wyatt said.

Wyatt had a 97 accelerated reader test average out of all of the books he read this year, Bray said.

“We push the averages, as well as the points because we want the students to comprehend what they are reading,” Bray said. “We don’t want them just taking the test to get the points. The better you read, the more you know.”

“He reads at a high school level,” Bray said. “He is a great reader, but he doesn’t like a lot of attention. His reading success has helped the other students in his class as well. He encourages others to read because he talks about the books to them.”

The accelerated reader program allows students to select books on their reading level, read the books independently and then take a computerized comprehension test. Each book a student reads is worth a certain number of points based on its length and the student’s reading level.

You Asked: Church Street not part of paving plan