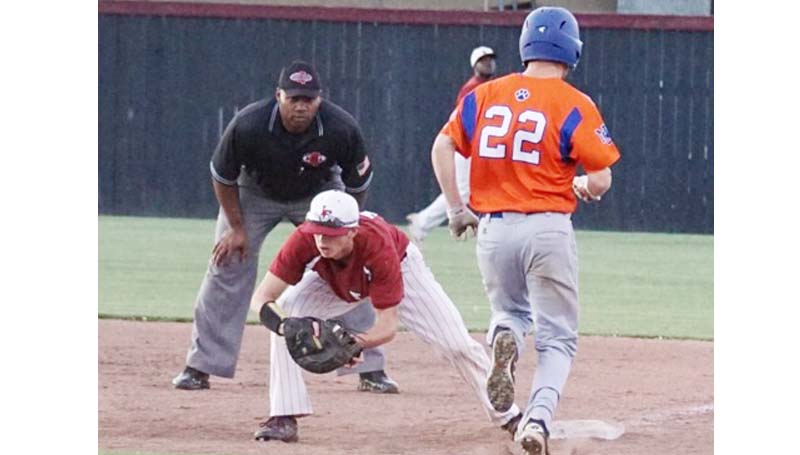 MONTICELLO – Lawrence County’s banner baseball season came to an end at the hands of Newton County Friday night. The visitors from Decatur completed a two-game sweep of the Cougars, beating LCHS 6-1 at Jimmie Davis Park. The previous night, Newton County claimed the first game of the series by a 9-3 score.

With the win, Newton County improved to 28-5 on the season, and advances to face either Northeast Jones or Sumrall in the South 4A finals. Lawrence County completed its season with a 27-4 mark.

“Obviously, we didn’t want our season to end tonight,” said second-year Lawrence County coach Josh Garrett. “But you’ve got to give credit to Newton County. They’ve got a fine team and they were in control of both of these games.

“We had a great season. I’m very proud of my players. They did a great job, and not only by winning a bunch of games. They represented our school and community very well.”

Lawrence County actually scored first. In the bottom of the first, Cougar shortstop Kasey Durr led off with a single, and was driven home by a two-out single from Marcus Atterberry. Unfortunately, for a large and enthusiastic home crowd, that was pretty much it for the LCHS offense. Only two more Lawrence County baserunners would get as far as second base. Atterberry’s sixth-inning single would be the Cougars’ only other hit.

In a route-going performance, Newton County’s Eli Harrison walked two and struck out only one, but was backed up by a strong defense.

“We got some good swings in the first,” said Garrett, “and I thought it was going to be a good night for us at the plate. After that, though, we made a lot of soft contact, and the best balls we did hit were right at them.”

Newton County tied it in the top of the second. John Ross Griffin, who went 3-for-3, hit a two-out double, and was driven home by a John Mark Vincent single. In the fourth, Newton County right fielder Cain Cleveland drove home two more runs with another big two-out single.

Standout shortstop Jacob Edwards laced a line drive homer in the fifth, making it a 4-1 game. In the sixth, Lawrence County lefty Brennan Lang had some bad luck. A soft bouncer went for an infield single. That was followed by a bunt single. Both of those players were eventually driven home by another soft hit, off reliever Kasey Durr, that barely cleared the Cougars’ drawn-in infield.

“It’s conceivable that we could have beaten that team,” said long-time LCHS assistant Craig Davis, “but we had to play a perfect game, and the breaks needed to go our way. Neither of those things happened.

“We lost to the best team we’ve played this year. No excuses, no alibis. They deserved to win. Hats off and best of luck to them.”

“That’s a great senior class,” said Garrett. “They will be sorely missed, and not just in terms of wins and losses. They’re a great bunch of guys.”