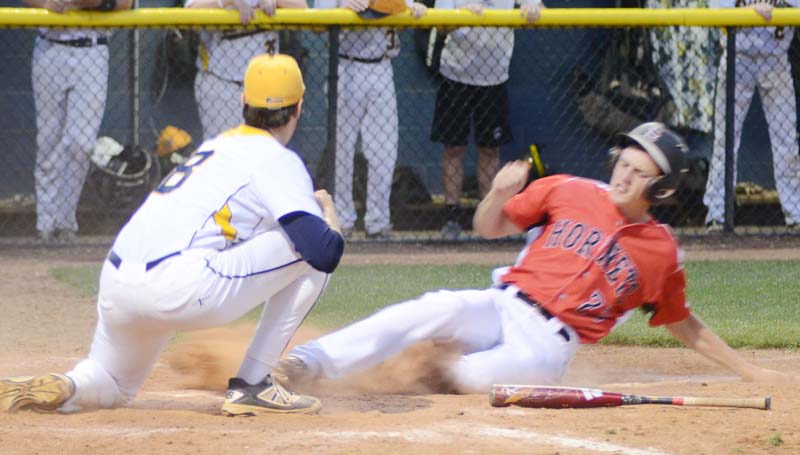 Daily Leader / Marty Albright / Loyd Star’s Dane Smith (23) slides safely under the tag of Madison St. Joe’s pitcher Jack Garrard (8) to give his Hornets a 6-5 lead in the top of the seventh inning.

MADISON – The Loyd Star Hornets captured a 9-5 win win over Madison St. Joe in the first game of the Class 2A South State baseball series Thursday.

“Big win for us tonight,” said Loyd Star coach Jared Britt. “Parker Flowers competed his tail off and our hitters were able to produce some big hits in key situations throughout the game. Overall, I am proud of my guys’ efforts, but we need to stay focused and try to protect our home field tomorrow.”

The Hornets (24-8) will resume action today when they host the Bruins for the second game of the series. Action begins at 7 p.m. at Smith Field.

The Hornets came out strong in the first three innings to claim an early 3-0 lead, but the Bruins rallied to tied the contest at 3-3 in the bottom of the third. 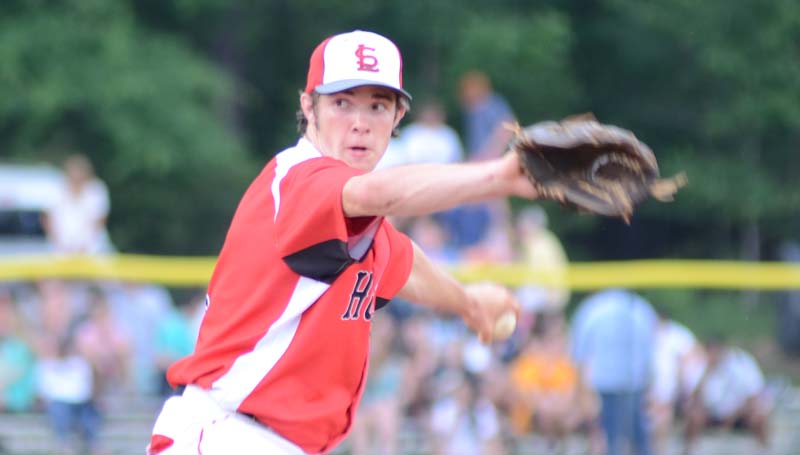 Both teams traded one run each in the fifth inning, before Madison St. Joe took over the lead at 5-4 in the bottom of the sixth after pushing across one run.

Trailing 5-4 in the top of the seventh, the Hornets came to life and they quickly capitalized on four Bruins’ errors to score five runs. Loyd Star held on for the 9-5 victory.

St. Joe committed six errors in the contest, while Loyd Star had five.

Parker Flowers was the winning pitcher with four strikeouts and three walks. Cade Hodges (1K, 0BB) pitched the save in the seventh inning.

Tucker Watts was the leader at the plate for Loyd Star with two singles. Levi Redd and Lamar Lang provided a double each. Cade Hodges and James Beard had a single apiece.

John Turner and Russell Patterson paced the Bruins with a single each.