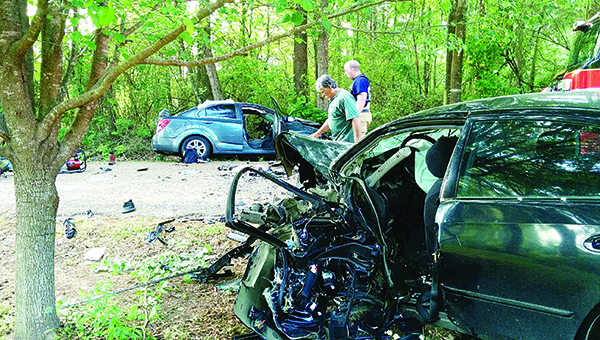 Daily Leader file photo / County engineer Ryan Holmes presented numbers on which roads had the most accidents over the past five years. The supervisors plan to use that information to evaluate which roads need repair the most.

County engineer Ryan Holmes on Monday presented the Board of Supervisors with data on all accidents that occurred in Lincoln County over the past five years. The county saw more than 700 accidents with 21 fatalities during that time.

The board previously requested the information in order to justify certain projects and to figure out what roads it should be focusing on in terms of repairs. Holmes said he received data for road accidents — where someone departed a lane and had a wreck — and intersection accidents — where there was a wreck at a four-way stop or where two roads intersected.

“A couple of y’all mentioned wanting information about intersections and roads that were having wrecks and issues on them,” Holmes said. “I got a hold of the right people, and I got the data on all of the wrecks on all of the county roads in the last five years — from 2011 to February of this year. According to this data, we’ve had 728 crashes, 21 fatalities and 570 injuries in five years, which is a lot.”

“I went through and highlighted some of the roads that had the most repetitive accidents,” Holmes said. “Auburn Road had 47 crashes. Thirty-two of them were drunk-driving related. East Lincoln Road had 42. Jackson-Liberty had 34. Mallalieu had 17. California Road had 20. Bogue Chitto Road had 20, and Hunters Road had 20. We need to look at whether they are in the same area on the road.”

In the past, District 4 Supervisor Eddie Brown voiced concern about the intersection of Jackson-Liberty Road and Bogue Chitto Road, but Holmes reported that there were only two wrecks at the intersection in five years.

“This data helps us justify a project,” Holmes said. “It’s good that we’ve got this data and a contact to get it now.”

District 2 Supervisor Bobby Watts requested that Holmes present the data divided by district to the board at the next meeting.

The Board of Supervisors awarded a Brookhaven High School senior its 2016 Mississippi Association of Supervisors scholarship at its board meeting Monday. 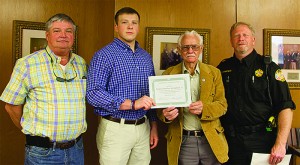 The MAS scholarship recipient’s parent, stepparent, grandparent, step-grandparent, legal guardian or spouse must be either a current or retired Mississippi county employee. The applicant must be a U.S. citizen, have a minimum GPA of 2.5, demonstrate community involvement and be a graduating senior who will enter his or her freshman year as a full-time student at any accredited public college, university, junior college or community college in Mississippi.

“On behalf of the board, we want to congratulate you on being the recipient of the MAS scholarship,” Chancery Clerk Tillmon Bishop said to Matthew during the scholarship presentation.

• The board appointed Emergency Management Director Clifford Galey as the agent in charge of gathering the necessary paperwork FEMA and MEMA require the county to provide in order to get reimbursed for 75 percent of the expenses from the last flooding event.

• The board approved a bid of $292,550.26, under the advisement of Holmes, for T.L. Wallace to complete roadwork on Topisaw Road.