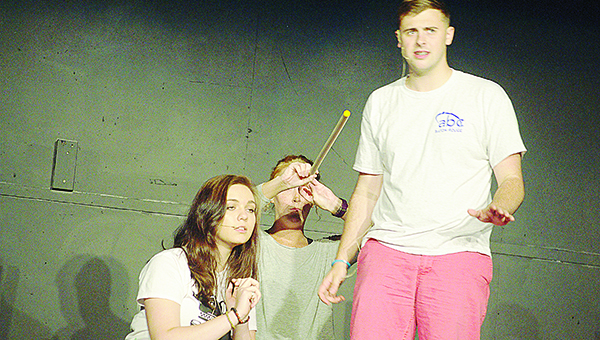 Photo by Aaron Paden / Matt and Luisa, performed by Andrew Barnett and Lauren Sasser, interact across a wall built by their parents and held up by Lindi Lane Smith at rehearsal for “The Fantasticks” at the Haven Theatre recently.

“There’s a boy, a girl, two fathers and a wall,” Shaw Furlow said.

Staring at 7:30 p.m. Friday, the Brookhaven Little Theatre will perform “The Fantasticks,” a musical whose original off-Broadway performance ran for 42 years. Furlow is directing.

“It’s the longest running musical in New York history,” Furlow said. “The cast over the years has included hundreds of stars who have gone on to be recognizable.”

Two fathers — Huckabee and Bellomy, played by Greg Russell and Brad Johnson — stage a feud and build a wall between their homes in a scheme to bring their children together in marriage. To bring an end to the feud, they hire the roguish El Gallo — played by Joey Sills — to stage an abduction.

El Gallo brings in Henry, a veteran actor past his prime, and Henry’s colleague Mortimer, whose specialty is dying. Henry and Mortimer are played by Doug Hoy and Matt Coleman.

The team puts on their performance and Andrew Barnett, performing as Huckabee’s son Matt, fights off his attackers as planned. He and Louisa — played by Lauren Sasser — are reunited. The feud ends and the pair is set for a happy ending. But life isn’t so simple, and this is only act one.

“The boy goes off on his own way, and he learns the hard way that the world isn’t how he thinks it is,” Barnett said.

Sasser and Barnett have both performed in BLTeens productions. Sasser is a Co-Lin graduate, and Barnett is currently attending. He hopes to pursue a career in the music industry.

While there is quite a lot of experience in this crew, there is also some fresh talent. Joey Sills and Lindi Lane Smith make their BLT debut in “The Fantasticks.” Greg Russell is executive director at BLT and no stranger to theater, but this marks his first musical.

Other members of the crew include Jana Russell as music director, Sherri Mathis as assistant director, stage manager and costume mistress, Lindi Lane Smith as choreographer, Charles Bridges as accompanist, Emily Waterloo and Trey Waterloo as producers, Troy Douglas on sound and James Minter on set design and construction.

The Dumpster Days portion of the Great American Cleanup just finished in Lincoln County. A summary of the collection at... read more