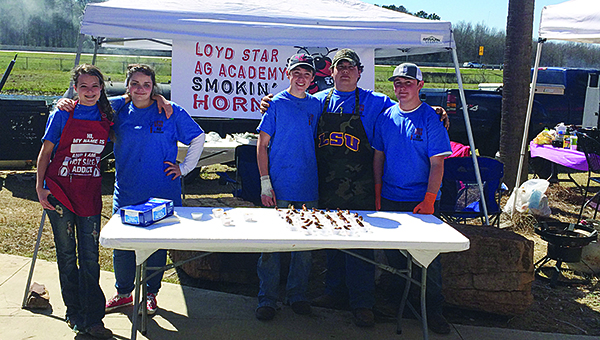 The idea came from a small group. Wendell Smith, Billy Sumrall, Robin Case and Joanna Posey sat around a table in Louisville, Kentucky, at the annual FFA convention when the beginnings of the Loyd Star Smokin’ Hornets cooking team was born.

“The idea was for kids who weren’t in band or played sports,” said Smith, a Loyd Star parent and sponsor of the group.

Smith, a competitive cooker himself with Hammertime Grilling Services, suggested the idea for a competitive cooking team. From there, the group stayed up until 1:30 in the morning trying to hash out the details.

“It’s totally different from academics or athletics or civic type things,” said Sumrall, a Loyd Star teacher and another sponsor of the group.

As of right now, no other schools have a cooking team, but Smith hopes that won’t be true for long.

“We challenged the other county schools to have a team at the Hog Wild Festival,” he said, although he wasn’t sure whether any would show up.

One of the challenges of starting a program from scratch has been to figure out the logistics of such an operation. Some members had no experience cooking on a grill, and others had only had basic training such as throwing a couple hamburgers on the grill. They’ve all been forced to learn about the process together. 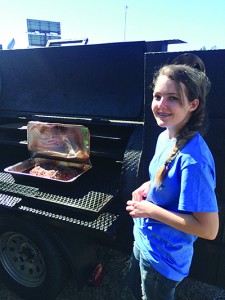 Harlee Davis keeps an eye on the smoker.

“I think it’s good that everyone is coming up together,” Smith said. “Everyone has a specialty that they do. Zach (Jenkins) is the keeper of fire, and Sarah (Beth King), you would be the chief spicer.”

Jenkins joined the team because it was something different.

“I don’t really do things with sports,” he said. “I do FFA, and it’s kind of related because of the animals.”

Sumrall said the cooking team teaches much more than how to work a smoker.

“The thing it does is teaching them leadership, social and critical thinking skills,” he said. “They have to plan ahead, think about presentation and interact with the public.” 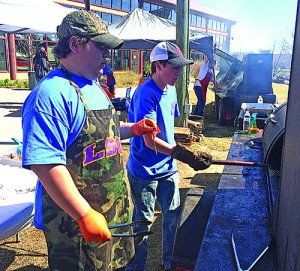 Sam Edwards (left) and Zach Jenkins fire up the smoker during one of the Smokin’ Hornets Cooking Team’s competitions this year.

Of course, his favorite part has been when his students had their aha moment.

“You could see on their faces, ‘We did this. This tastes awesome,’” he said.

Since then, the team has kept running forward, constantly trying to improve.

The team’s first competition was at Bass Pro Shops, and they were pleasantly surprised by the outcome.

“We didn’t really know what to expect,” Jenkins said.

“These kids who had never cooked before were 10 points behind me,” he said.

When asked what competitions are like, the team agreed it’s a lot of eating.

“You go home not wanting to eat anything for a couple days,” Jenkins said.

“If they can’t cook it, they know what it’s supposed to be,” he said.

They also have been able to judge a competition in Lucedale, and Jenkins and King both agreed that it helps them to know how to tweak their own presentation to appease other judges.

Another challenge has been collecting the necessary materials.

“I get wood by the trailer load,” Jenkins said.

And the amount of meat needed has also been extravagant.

“We’re real fortunate,” Smith said. “The Country Meat Market pulls out racks and lets them pick out which they want.”

With all the supplies comes a cost.

“It’s more than just paying your dues,” he said. “We’ve done creative things, and we have some creative things in place for the future. And we’re always willing to accept sponsorships.”

A byproduct of the team has also benefitted teachers. When the team practices, they’ll cook all throughout the school day checking on it during breaks. When they finish, they distribute the cooked food to the teachers. The only requirement is that the teachers must give feedback to help the students improve.

“It has been so well received that we will now have two teams by Hogwild,” Smith said.

Sumrall said they also plan on having a third team together soon.

The Hog Wild competition, which will be held in downtown Brookhaven Saturday, will be the team’s first competition in Lincoln County.

“It’ll get them in front of their home folks,” he said. “A lot of people will like to taste and see what they’ve done.”

Plus, the competition carries a cash prize.

“That should bring people out of the woodwork,” Smith said.

Although this will be their first time competing in Lincoln County, they did recently provide the food for the FFA banquet.

“People are starting to realize these kids are doggone good,” Sumrall said.

Karlee Ann Martin and Drew Phillip Worthy, of Brookhaven and McComb, respectively, announce their engagement and approaching marriage. She is... read more