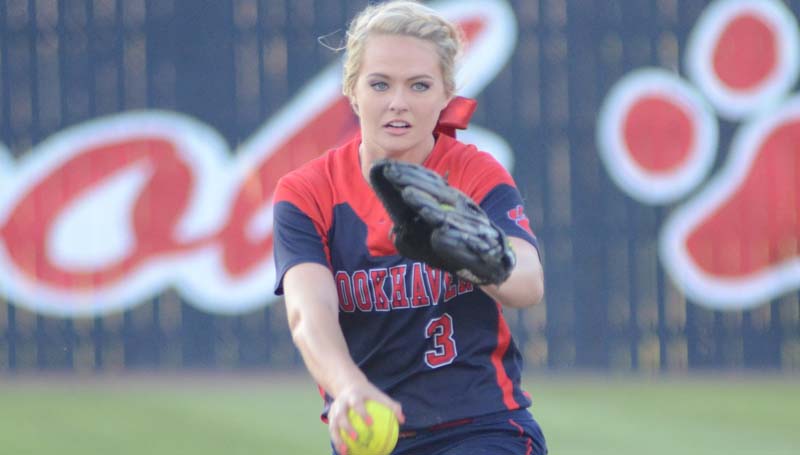 The Brookhaven Lady Panthers advanced to the third round of the MHSAA fast-pitch softball state playoffs for the first time in 10 years.

The Lady Panthers battled the current Class 5A south state champion, West Harrison, in three close and thrilling games. Brookhaven fell to West Harrison in the opener 7-4, but battled back to win 5-1 in the second game. In Game 3, the Lady Panthers suffered a tough 6-4 decision to end their playoff run.

Brookhaven senior pitcher Katherine Shell left it all on the field as she pitched all three games in two days. Shell struck out a total of five batters and allowed only four walks to West Harrison. At the plate against West Harrison, she finished with two homeruns and two singles.

Shell concluded her senior season with a .354 batting average, 35 RBIs, 10 doubles, seven home runs and one triple. She finished third overall on MHSAA’s homerun list. In the circle, Shell posted a 17-8 record with a 1.28 ERA. She struck out 126 batters and allowed only 40 walks in 159 innings pitched.

For her performance, Shell has been selected as the Most Valuable Player on The Daily Leader’s 2016 All-Area Fast-pitch Softball Team.

“Shell has been a very fun player to coach,” said Brookhaven coach Mandy Vinson. “She has a love and passion for the game of softball.

“Shell has been a huge part of our success over the last couple of years. We appreciate how hard she has worked over the past few years at bettering herself in order to help us build up our program. We will miss her next year, but we are excited to see the things she will do at the next level. We wish her the best of luck.”

Shell is joined by a great pitching staff on the All-Area team – Makenzie Smith of Loyd Star, Christian Black of Bogue Chitto and Jordan Harp of Lawrence County.

At catcher are Haley Speaks of Brookhaven, Makennah Redd of West Lincoln, Megan Norton of Loyd Star and Shelly Case of Franklin County.

Katherine Shell, a senior right-hander, proves that hard work and determination pays off after suffering an injury in between slow-pitch and fast-pitch softball seasons. She worked hard during rehab to get herself ready for the first game of the fast-pitch season.

“I am very honored to be picked the Daily Leader’s MVP. I know the long and rich history of softball players that have come before me and to be put in the same class with them is a great accomplishment,” she said.

Shell, the daughter of Matt and Lucy Shell, signed a softball scholarship to play for the East Central Community College Lady Warriors. She will start in the fall and plans to major in biology/pre-med. After ECCC, Shell plans to attend Mississippi College.

Shell shared her thoughts on Brookhaven’s season and her coach Mandy Vinson.

“Our team really came together this year,” she said. “We had a great group of girls that competed to win on every pitch. We were only one hit away from taking Game 3 from the eventual South State 5A champions. Overall, we had 22 wins this season and that is the most wins in any one season during my high school career.

“Coach Vinson has been more than a softball coach to me. She has been a great role model and mentor on the field and off the field. She has pushed me to be a leader in the school and on the team. In addition to being a fantastic and dedicated coach during school ball, she has helped me to hone my softball abilities through coaching me during the summer months, too,” she said.

Jordan Harp,  a senior, provided the Lawrence County Lady Cougars with a 16-8 worksheet. On the rubber, she had 1.10 ERA with 166 strikeouts in 151 innings pitched on the season. She pitched 10 shutouts earning one perfect game and one no-hitter.

Haley Speaks,  a senior, was the defensive leader behind the plate for Brookhaven with a .812 fielding percentage. Offensively, she batted .302 on the season with 23 RBIs, four doubles, three triple and one homerun.

Makennah Redd,  a junior, had a .436 batting average for the West Lincoln Lady Bears. She collected 17 RBIs on 24 hits with eight doubles.

Megan Norton,  a senior, showed off her skills behind the plate with a .977 fielding percentage. At the plate, she batted .346 on the season for the Loyd Star Lady Hornets.

Shelly Case,  a senior, batted .379 for the Franklin County Lady Bulldogs. Behind the plate, she posted a .944 fielding percentage.

Ali Gartman,  a senior, had a .367 average at the plate for Loyd Star with four doubles, five homeruns and 21 RBIs.

Abigail Thornton,  a junior, helped guide the Lady Hornets through a great season. She batted .256 and finished with a .935 fielding percentage on defense.

Elizabeth Smith,  a senior, helped her LCHS Lady Cougars on the season with a .400 batting average.

Codi Leggett,  an eighth grader, showed off her talents for the Bogue Chitto Lady Cats. She led the team with a .416 batting average. Defensively, she had a .976 fielding percentage.

Allison Livingston,  a senior, batted .412 for BA Lady Cougars. Her slugging percentage was .587 and she had a .602 on-base percentage.

Carlee Nations,  a sophomore, posted a .865 fielding percentage for the Lady Jacket. Offensively, she batted a .288 with four doubles and had a .517 on-base percentage.

Josie Nations,  a sophomore, played a big part in Lawrence County’s run in the playoffs. Offensively, she compiled a .385 batting average.

Kat Wallace,  a freshman, had a .406 batting average for the Lady Panthers. Defensively, she finished with a .905 fielding percentage.

Haley Nations,  a sophomore, had a great season in the pitching circle for Enterprise. She finished with a 1.47 ERA with 138 strikeouts, 38 walks and had an .939 fielding percentage. Offensively, she earned a .355 batting average.

Emilee Wallace,  a junior, batted a .320 on the season for Franklin County. Defensively, she had a .935 fielding percentage.

Arie Douglas,  an eighth-grader, had a breakout season for the Wesson Lady Cobras as she batted .410 on the season.

Zariah Matthews,  a senior, showed off her blazing speed both offensively and defensively for the Bogue Chitto Lady Cats. She earned a .505 batting average at the plate and had a .946 fielding percentage as the Lady Cats’ centerfielder.

Tia Bussey,  a junior, provided speed in the outfield and on base. Defensively, she compiled an amazing 1.000 fielding percentage. At the plate, she posted a .442 batting average as a slap hitter.

Callie Fortenberry, a junior, had a great season as an outfielder for Lawrence County with a .420 batting average.

Shelbi Maxwell,  an eighth-grader, had a great season for the Lady Cobras. Offensively, she earned a .426 batting average.

Hanna Moak,  a senior, batted .316 on the season for the Lady Bears.

Leggett named Coach of the Year