Salute to the ultimate sacrifice 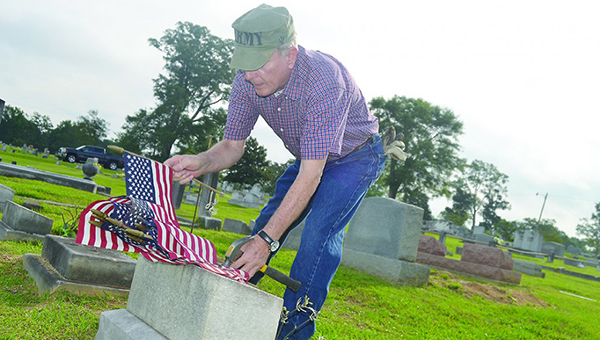 For many, Memorial Day is an opportunity for a day off work and a long weekend, maybe a quick trip to the beach to kick off the summer or some backyard grilling of burgers or barbecued ribs.

But this Monday is a holiday for a reason. It is a day bought with the sacrifices of men and women in our armed services who gave the ultimate gift for our freedom — their lives.

Roger and Doug Easley lost their older brother, David Roy Easley, in the Vietnam War. The two, the youngest of seven children, see Memorial Day as a day to remember their brother and encourage others to use the day to honor those who have given the ultimate sacrifice.

“They think of it as a day off,” Roger said.

David Easley was killed by artillery fire on April 9, 1970, in Quang Nam, South Vietnam. He was 19 years old.

“He was the average solider in Vietnam,” Doug said. “He was 19. He was actually supposed to come home and they pushed his departure date back a couple of times. You can’t say he wouldn’t of gotten killed, but…”

“If he’d have gotten to come home on his first departure date, then he wouldn’t have gotten killed,” Roger said. “That’s the luck of the draw.”

At that time, soldiers were serving a year in Vietnam, but when they began to burn out, the government pushed their service back to six months, Doug said.

“At that time in our country, the draft was strong,” Roger said. “He quit high school and the draft — when you quit (school), your draft number jumps.”

“He knew he was going to be drafted,” Doug said.   “So, he said he would rather join the branch he wanted to go into. He went into the Marine Corps. He didn’t have any direction in his life and the recruiter told him he wouldn’t see Vietnam. And David believed him. Of course, he finished boot camp at Parris Island, South Carolina, and then went straight to Vietnam.”

Doug believes David got the idea of joining the Marine Corps after talking to their uncle, who served as a marine in Korea.

“I don’t know where else he would have gotten the idea from,” Doug said. “I do remember Uncle Roy told me he tried to persuade him not to go.”

At the time of David’s death, Roger was 12 and Doug was 10, but their memories are still strong of all the fun times the brothers shared.

“From all that I remember, he was a character,” Doug said. “He liked to kid around. He was the typical young guy.”

Roger remembers playing outdoors. “In those times, we had acres of woods around our home. We would stay in them. We built houses, huts — whatever you want to call them — and we all just played.”

“He was just a good guy,” Doug said. “Do you really have any bad memories after all this time? Not really.”

The day Roger and Doug learned David had been killed, the brothers were tending their garden with their mother. A car drove up, their preacher and a military leader stepped out and both walked to their mother and delivered the news.

Their brother never expressed to Doug or Roger what his future plans were when he returned home, but in his letters he always talked about having fun.

“I have the last letter that he wrote from Vietnam, talking about all of the fun things he wanted to do when he got home,” Roger said.

“He was just ready to get out of Vietnam,” Doug said. “He was tired of what he was going through and what he was seeing. Vietnam was a mess. There have been more soldiers who committed suicide than actually died in the Vietnam War. And more than 58,000 soldiers died in the war.”

Roger believes David would have gotten married and had a family if he’d come home.

The brothers said one of the few things they find comfort in, in David’s death, is seeing how some soldiers have fared who returned from the war.

“I’ve seen some of the guys that came back and I’ve seen how some of their lives wound up,” Roger said. “I know one that’s got Agent Orange just awful, and he’s just…”

“His nerves are gone,” Doug said. “I don’t mean he’s nervous, I mean his nervous system is destroyed. As hard as this is to say, if my brother had come back from Vietnam as messed up as some of the soldiers did, I would have rather he died there.”

The Easleys don’t focus on why their brother died in Vietnam.

“There are so many things in this life, that you never know the why — the answer to that,” Doug said. “I learned a long time ago, God is still in control. He knows what he is doing. I’ll find out one day why. It’s just not important for me to struggle over that now. Like I said, 58,000 and something other families dealt with the same thing. We are not unique. There are some that dealt with it worst.”