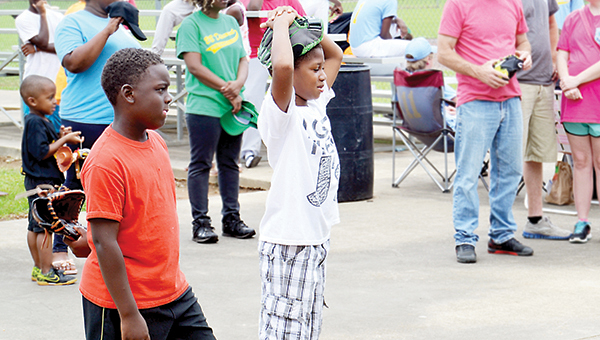 But first the officials had to speak at the opening day ceremony, and Aria was impatient.

“She really wanted to play,” said her grandmother, Sandra Bledsoe.

About 75 people came out Saturday morning for the opening, including many players dressed out and ready to run bases.

Program Director Roy Smith said if the weather held out after the ceremony, they might be able to play some games on the two fields.

Smith said this is the most successful season they’ve had with participation and community support. Twenty-five teams are scheduled to play.

“The devil stays busy, but our program has been ordained by God,” he said. “We don’t let anything deter us or stop us from going forward.  If we’re moving in any direction other than forward, we’re moving in the wrong direction.”

Smith said his participation is all for the children in the community. “If we plant some seeds, we’ll reap what we sow,” he said.

Brookhaven Police Chief Bobby Bell thanked the volunteers and supporters of the program. “Every time we have a ballgame over here, that’s a kid that we have over here that’s not on the streets getting into trouble,” he said.

Curtis Oliver, league vice president, played at the park on Dr. Martin L. King Jr. Drive more than 40 years ago. He said he is happy to see so many parents and community members support the baseball program.

Ward 2 Alderman Terry Bates, who sponsors a team in the league, said he’s working to get a swimming pool installed at the complex if the budget allows. He didn’t get enough earmarked for the pool in the last budget, but pledges to keep working toward it. “We were blessed to get a little bit,” he said. “We’re going at it again this next budget to see what we can do to get a swimming pool here. It’s all about the children, these boys and girls. This is our future.”