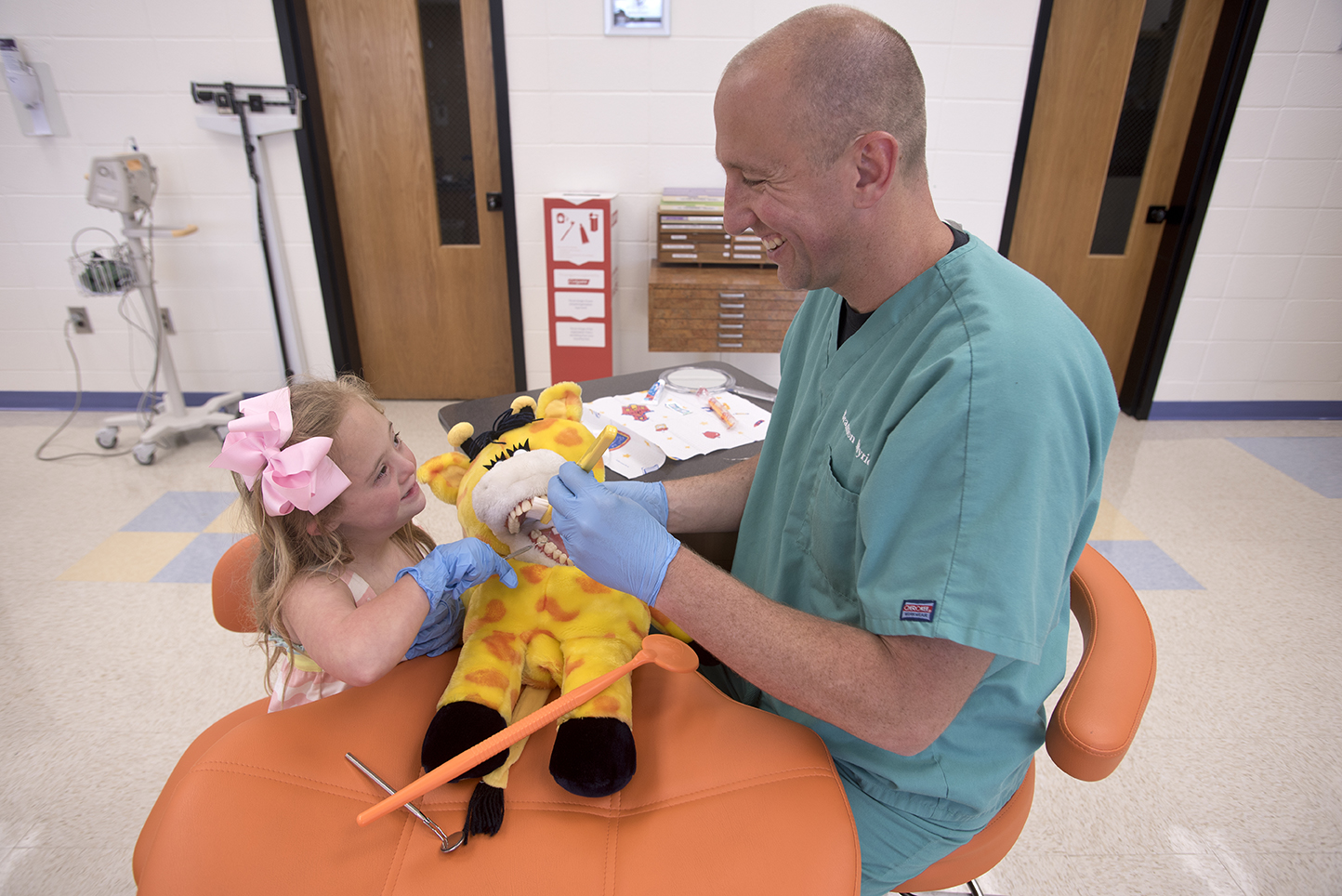 Photo submitted/
Seeing a Smile Train advertisement in a magazine while attending therapy with his daughter, Leighton (left), led Brannon Myrick to consider a career in dentistry. Myrick, a graduate of Brookhaven Academy, recently graduated from the University of Mississippi’s School of Dentistry.

A former graduate of Brookhaven Academy is all smiles about his third career choice.

Brannon Myrick, 37, decided to follow in the family footsteps after he graduated high school in 1996 and study nursing. His parents, Greg and Merlene Myrick, were both in medicine as is his sister.

Though his parents moved to Florence a few years ago, his dad still works as a nurse anesthetist at King’s Daughters Medical Center.

Brannon Myrick earned a nursing degree from University of Southern Mississippi, where he also met his future wife, Lisa Poole Myrick from Natchez.

Though nursing was a good fit for Myrick, he had an itch to try something else. “I just wanted to do something different,” he said.

His father-in-law was in construction, so Myrick pursued that career, earning a master’s degree in engineering technology.

He took a job managing multi-million dollar construction projects nationally, moving where the work was. They were in Fort Campbell, Kentucky, when their daughter Leighton Olivia was born.

Although the delivery was uneventful, the doctors and nurses whisked their firstborn away. Little Leighton was diagnosed with Down Syndrome.

“Once she was born it was a game changer. We decided to come home,” he said.

The Myricks moved to Hattiesburg. “We knew we needed the support of family,” said Myrick. “We realized early intervention is a big thing, which is one of the main reasons you want a home base. You can’t just go moving all around and having to re-establish those services.”

They started Leighton on multiple therapies, including physical and occupational therapy, so that she could meet her developmental milestones. It was during one of Leighton’s therapy visits that Myrick saw a magazine article about  a cleft lip and cleft palate repair team called Smile Train. He noticed there was an oral and maxillofacial surgeon among the team of professionals and it caught his eye.

He shadowed an oral surgeon and a few other specialists to get an idea of what the job entailed. “I shadowed all the specialties and general dentists to get a feel for what was out there. I liked it,” said Myrick. “After my first day of shadowing, I realized that the profession has everything I was looking for in a career.”

Two weeks ago, Myrick graduated from the University of Mississippi’s School of Dentistry. He took home multiple awards from senior honors night, including the American Association of Oral and Maxillofacial Surgeons Dental Student Award, the Pierre Fauchard Academy Senior Award, the Omicron Kappa Upsilon Dental Honor and the Dean’s Scholastic Achievement Award. He was also inducted into the Phi Kappa Phi Honor Society.

Myrick’s nursing background gives him the skills he needs to interact with his patients and the construction experience gives him the organization and multi-tasking skills that will obviously come in handy as well.

He’s accepted an oral surgery residency so he’ll go back to medical school and complete his residency before starting a practice.

He hasn’t ruled out his hometown as a possibility.

“Brookhaven is an appealing place to me as far as raising a family,” he said.

Leighton, now 7, is big sister to Laurel Rae, 5, and Lincoln Gregory Cranford, 1. “Who knows, I may end up right back in Brookhaven.”

Myrick believes dentistry was his calling all along and he credits his oldest child for leading him to that path.

District 5 Supervisor Doug Falvey presented the Lincoln County School Board with a proposed lease contract that would allow the... read more