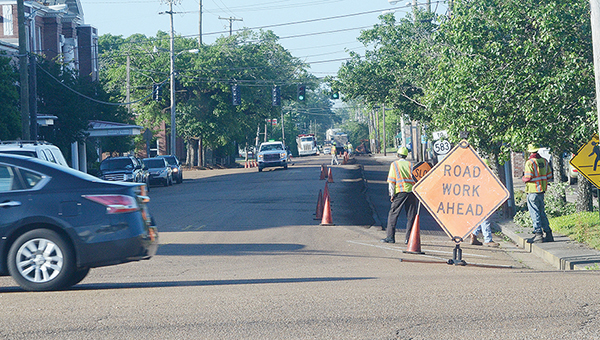 File photo/Engineer Ryan Holmes informed the Brookhaven Board of Aldermen at Tuesday’s board meeting that the city’s paving project was 68 percent complete as of May 31.

At Tuesday’s Board of Aldermen meeting, engineer Ryan Holmes updated the board on the progress made on the city’s nearly $3.1 million paving plan.

As of May 31, Dickerson & Bowen has used 68.9 percent of their days allotted to complete the project, and have paved 68.47 percent of the streets. The contract states the company has until the end of July to finish paving the roads.

Holmes said the project has not seen any major problems since the start.

“Paving is going well,” Holmes said. “We’re continuing to make good progress. We have run into some minor problems, but nothing that has shut the project completely down.”

Nicholas Marshall of Chase Marshall Architects in New Orleans spoke to the board about their design ideas for Brookhaven’s new fire station.

At an April board meeting, Mayor Joe Cox announced Brookhaven would receive state funds to construct a new station.

“What we put together is a portfolio of our work and offices,” he said. “Since about 2008, we’ve done about 14 fire stations so we know what we are doing.”

The company has offices in New Orleans and Lafayette.

Marshall said his firm has some generic understanding of what the city might want in its new fire station.

“We are fully capable of following this project through all phases of construction,” Marshall said. “We would expect to use all local consultants. We want people on the ground.”

Brookhaven is set to receive $625,000 in state funding for the project later this summer. The funding was included as part of a $250 million bond bill.

Fire Chief Tony Weeks, the mayor and the board have been pitching the city’s need to replace Fire Station 2 on Willard Street to different sources for the last two and a half years, Cox said.

The board did not take action on Marshall’s proposal. It’s waiting until the city receives the funding before it chooses an architectural firm.

Chase Marshall Architects is the third firm to present ideas to the board on the proposed fire station. Jamie Wier and Michael Boerner of Wier Boerner Allin in Jackson and Steve Cox of Cox Architecture in McComb presented their plans at previous meetings.

•Holmes informed the board the Old Train Depot roof project bid opening is scheduled for June 21.

•The board scheduled a work session on June 21 at 5:30 p.m. to discuss the city’s options for downtown parking renovations.

•Public Works Director Keith Lewis distributed maps, outlining the four quadrants of the city to each aldermen at Tuesday’s meeting. He explained that the public works department would begin following a schedule on Monday, based on the map. He divided the city into four quadrants and assigned each one a week of the month that the public works department would be servicing it. Lewis said the department would stick to this schedule, unless an emergency arises. He said he hopes this will allow them to fulfill more work orders than before.

•The board approved Lewis’ request to replace the motor in the city’s 2008 Regent dump truck for $33,931.18. The dump truck’s motor blew up recently and Lewis would like to replace it because it is one of the newer dump trucks the city owns.

•The board approved Greenbriar Digging Service’s bid of $57,600 to replace 24 fire hydrants along Hwy. 51 and Brookway Boulevard.

•The board approved Greenbriar Digging Service’s bids to hook up the city’s newest water line services on Amite Street for $29,400 and on Fortune Street for $9,100.

•WGK engineer Mike McKenzie informed the board that the city is currently taking bids for the Manson Street pump station. The bids will be taken through June 20. The project should be completed by the end of October, McKenzie said.

•McKenzie also said the city should begin advertising for bids for the brick storm drain repairs at the intersection of South Church Street and West Chickasaw Street.

•Alderman-at-Large Karen Sullivan updated the board on progressing occurring to the Rose Hill Cemetery fence repair. Sullivan said all three sides that will be repaired have been torn down.

•Sullivan informed the board that the Freedom Tree in Railroad Park is dead. She is working to get the tree carved, shellacked and preserved because it was planted in memory of Danny Entrican, a POW from Brookhaven.

A Brookhaven Academy graduate’s jambalaya proved to be a winning dish in Wednesday’s episode of the Fox culinary reality show,... read more