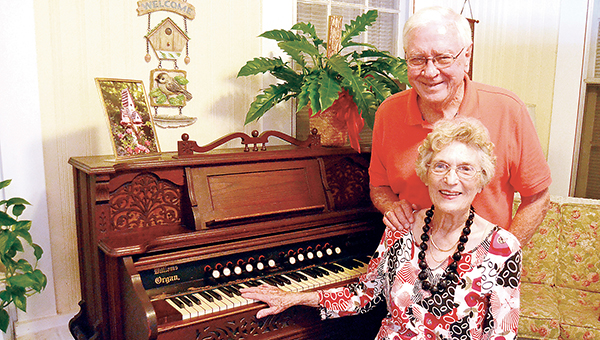 Photo by Donna Campbell/Tom Moak likes to sing hymns while his wife, Willa Moak, plays the antique Parlor Queen organ in their sunroom. The organ, built in the late 1800s, once belonged to Willa Moak’s aunt, Nannie Montgomery.

Willa Moak moved an old friend into her Bogue Chitto home and couldn’t be happier at the reunion.

Moak, 83, believes she was born with music in her soul. Her love of all things melodious began as a young girl, when she’d scamper down a path in the woods to her aunt’s house around the bend in south Lincoln County.

At Nannie Montgomery’s house, the young Willa fell in love with her aunt’s pump organ. It was a Parlor Queen, built in Chicago by Williams Organ Co in the late 1800s.

“As long as I can remember, my aunt had this organ,” she said. “She was always so gracious to let me mess with it as a child.”

Aunt Nannie, her daddy’s oldest sister, died in ’46 and the organ found a new home with one of Moak’s piano-playing cousins.

She thought she’d lost it forever.

She rediscovered it a decade later, in the Crystal Springs home of another aunt, Caledonia Palestine Brister.

The organ was passed among Moak’s cousins. It moved from Bogue Chitto to Crystal Springs, then to McComb and Natchez.

At one point, Moak was given a pump organ, which she had refurbished, but it couldn’t fill the void. It held no memories for Moak. “It’s not the same. That’s not family,” she said, referring to her aunt’s antique organ.

A year ago, a cousin of Moak’s who knew of her sentimental attachment to the organ shared some good news. She knew where the organ was hiding. It was at a niece’s home in Natchez and the current owner gave it to Moak in January. The Moaks’ son, Bill, and their grandons headed to Natchez to load it up and bring it home.

Moak said the organ sounds the same as it did when she was a child, stretching her legs to reach the pedals. Back then she pecked with her finger tips, while now her aging hands glide over the keys, creating chords with her touch. “Of course, I didn’t know how to play then,” she said.

But she does now. The organ with the solid oak console in a deep walnut hue sits in the Moaks’ sunroom in what was once the front porch of the house her father built.

Moak jumped up to play “Blessed Assurance” and her husband joined in singing “This is my story, this is my song.”

Moak’s tiny feet pumped the pair of pedals, activating the bellows in back. The organ’s rich tones filled the room where the couple share prayers and Bible study.

She’s overjoyed to finally have her aunt’s organ at her home.

“I’m just happy to have it, even though it has a lot of wear, like me,” she said.

The Moaks will celebrate 61 years of wedded bliss Sunday. Her husband, Tom, a former Baptist minister of music, has written several hymns for her to play.

Education eventually rubbed off on Rita Robinson. Though the Brookhaven woman comes from a family of educators, she chose a... read more