‘I’d already made peace with God’ 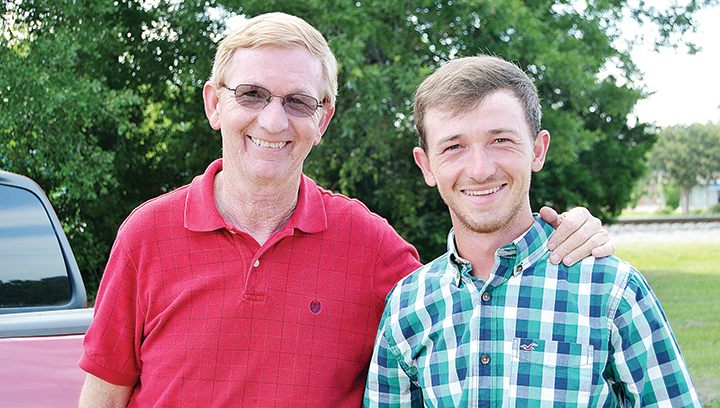 Photo by Donna Campbell/James Laird (left) and son, Jonathan, will likely spend Father’s Day together reminiscing about the years the two have shared thanks to the generosity of a donor family whose gift of their son’s liver saved Jonathan’s life 24 years ago.

Every day is a good day for a Brookhaven dad.

That’s because James Laird can look at his children — Michael, Jake, Jonathan and Caroline — and feel blessed that he’s a father to all four.

Laird owes the honor to a family he’s never met, a couple who said OK to an organ donation from their deceased son to Jonathan 24 years ago.

Laird has vowed to give something back to honor the family who sacrificed their loved one’s organ so that his son could enjoy his life.

Before their baby got sick, Laird had never considered becoming an organ donor. “I never thought about it back in those early days,” he said. “That’s the way it usually goes until affects you, you don’t really stop and think about it.”

His and Alma’s first two sons were healthy, so they didn’t expect to encounter problems with Jonathan. He stayed sick as a baby, and doctors couldn’t determine why his liver was failing. At 10 weeks old, he needed a new liver to survive.

He couldn’t use a portion from either of his parents’ livers because at the time, that procedure had not been pioneered, Laird said.

He’d had four exploratory surgeries by the time he was 5 months old. Doctors never determined what caused his liver failure.

In May, 1992, the Lairds took Jonathan to Omaha, to Nebraska, one of four hospitals a critically-ill child needing a transplant could go for treatment.

Jonathan weighed less than 9 pounds at 6 months, and most of that was fluid, Laird said. Jonathan was given less than 48 hours to live, which bumped him up to the No. 1 priority on the transplant list. Doctors located a liver soon after.

Before the surgery, Laird gazed out the window at the snowflakes.

“I’d already made peace with God,” he said. “I said, ‘Look, if you let him live, I’m fine with that, and if you don’t, that’s OK, too, because i know he’s going to heaven and will be an angel.’ I just said, ‘God, if he gets well and I get back to Mississippi, I’m going to do whatever I can do to promote organ and tissue donation.”

The Lairds never met the donor family, who wished to be anonymous. They know only that it was a family from Nebraska who’d tragically lost their young son.

Their generosity gave Jonathan a second chance at life.

“I feel like I’m living my life for two people,” said Jonathan, who is owner-operator of Laird Lawncare.

The Lairds became organ donors soon after their experience and James Laird worked for a while as community education/volunteer services worker with Mississippi Organ Recovery Agency. He and Jonathan have testified before legislators to change laws that would make the success rates of transplant centers and a patient’s status on a waiting list easily accessible to people needing transplants.

MORA recently announced a new “It’s Super Easy” marketing campaign to raise awareness of how easy it is to register as an organ donor, which the agency calls “super heroes.”

The campaign is designed to give those seeking to register as an organ donor an easy option of becoming someone’s hero.

The campaign has its own page on the web, itssupereasy.org.

That was done to create more buzz around the campaign, Stinson said. “This is different from anything we have ever done in the past to promote organ donation. The landing page is a registration form that can be filled out in less than two minutes but it also allows access to the other elements of the campaign which we think are really cool and really promote what the campaign is about and that is, ultimately, getting people to register as organ donors.”