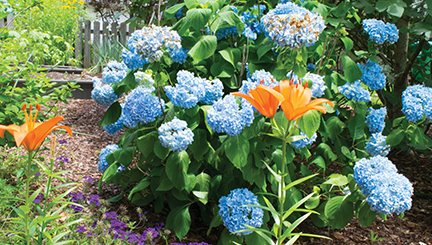 Photos by Julia Miller/The Naegers credit their beautiful garden at their home on Morningside Drive to embracing nature and following God’s glory.

When you embrace nature, it’s not hard to have a beautiful yard, which is exactly what the Naegers have done at their Morningside Drive home for the past 10 years.

“We just get what we like,” Renee Naeger said on a warm Thursday afternoon when the Adams County Master Gardeners came for a tour.

Although the lot isn’t particularly big, it is jam-packed with a little of everything from veggies to the brightest blue hydrangeas and everything in between.

“We don’t do anything for a reason,” Bob Naeger said. “We put it where ever it fits.”

Ironically, the Naegers almost didn’t buy the house because it is a corner lot.

But after eliminating some of the exiting plants and several dump loads of dirt, the Naegers have managed to completely transform the home, a feature that benefits any drivers by who want to take in the bright colors and natural beauty surrounding the home.

Though the Naegers spend most of their free time in the garden, Renee said they generally don’t spend much money on the plants. They’ll plant from offshoots of other plants from fellow gardeners, and they’re always quick to offer the same from their own plants. Renee said Bob’s favorite section to shop at the in nurseries is the clearance.

Bob, a forester, is particularly dedicated to the outdoors.

“I guess I came by it naturally,” he said.

Renee said she expects the garden to get more attention as they grow older.

“When he retires, I won’t see him in the house except at night,” she said. “On his days off, that’s already how he is.”

Tending to the garden is a family affair that extends to the Naegers’ 23- and 27-year-old daughters, Sam and Chloe. Recently, they were speaking to their daughters about parents and children not always having the same interests. For the girls, the reason for the shared love of gardening was simple.

“Our youngest said, ‘That’s just what we always did,’” Bob said.

“This is a testament of God’s glory,” he said. “We’re just tending it.” 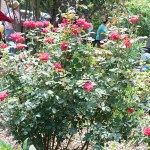 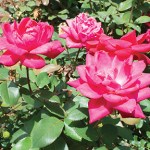 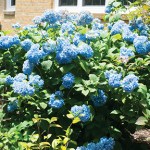 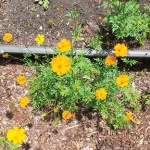 Dora Hill and Kellvin Wilson, of Brookhaven, announce the engagement and approaching marriage of their daughter, Audora Hill, of Brookhaven,... read more