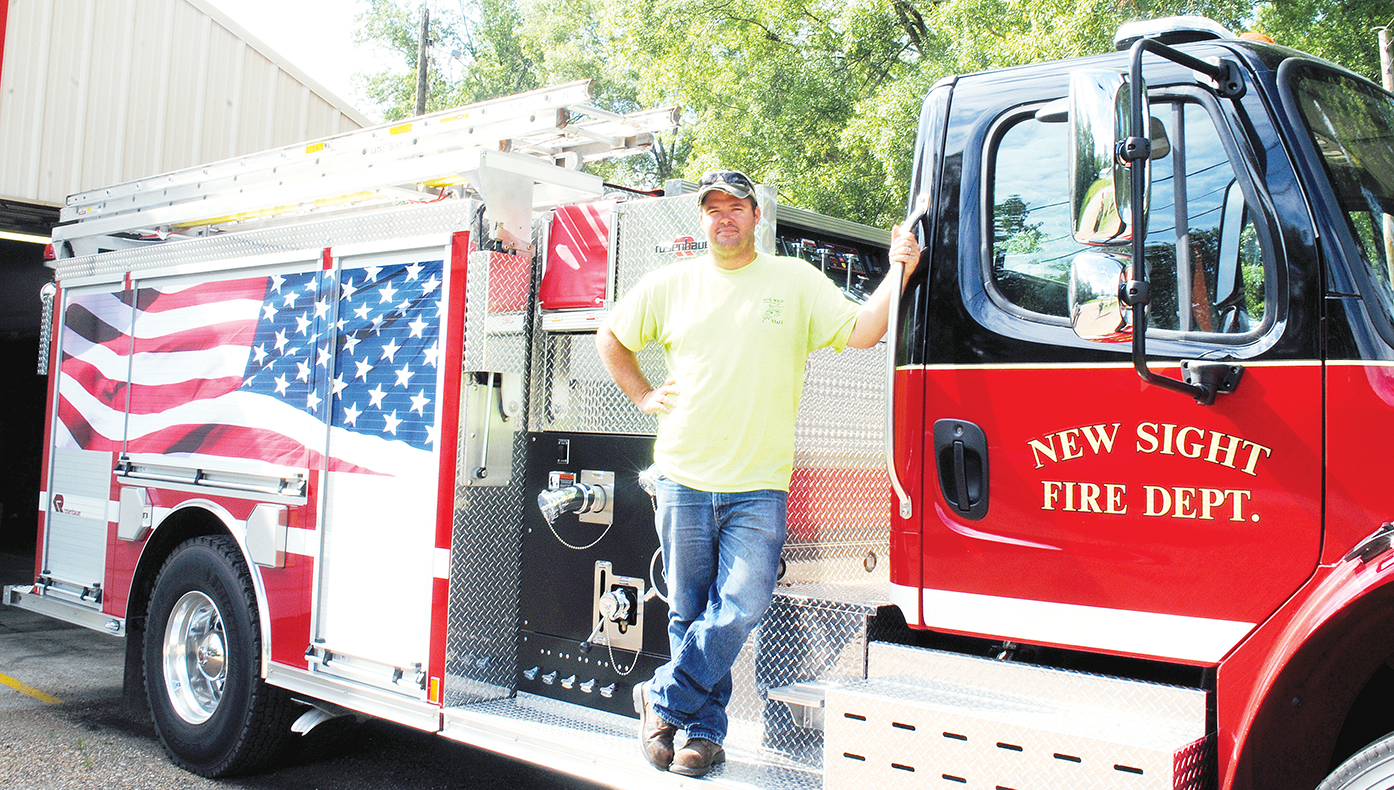 Photo by Aaron Paden/Cory Smith has served as chief for the New Sight Volunteer Fire Department for three years.

Cory Smith is a volunteer firefighter. He’s also chief of the New Sight Volunteer Fire Department. For him, the job began five years ago as he was settling into the New Sight community.

“I work in road construction as my job,” Smith said. “So I see a lot of stuff go on on roads. I ran across a few accidents where I was able to help. I settled down in this community, and I said I wanted to serve somehow.

“So I came up with this idea. I hit it with my feet on the ground running, and we’ve done some tremendous things. Not just myself, but everybody we’ve done working together — we’ve achieved a lot in the past five years.”

Being a volunteer firefighter means being ready to respond to emergencies at any hour, all while holding a regular day job. This sometimes leads to long hours and strained relationships, but Smith said it helped that his wife also volunteers for the department.

“She comes to calls,” he said. “She knows what I do. Not saying sometimes she isn’t disappointed when I’m gone a long time, because being chief, I do a lot of stuff at home as far as trying to promote different things we’re doing.

“We have a car show every year. I work hard to get it going. Of course, the Hog Wild Festival we all participate in. I’m on the committee for that. So once a month, I’m always gone one night to that. I spend a lot of time here (at the station). A lot of time on weekends.”

Smith said if there’s an emergency and he’s in the area, he’s going to do what he can be there. Smith recalled one scene that he was on for 15 hours.

“It was an accident on the interstate — an accident and a fire,” he said. “We got called out at like 11 o’clock that night. It was a Saturday night. I left the scene at 2 o’clock that Sunday (afternoon). That was right at 15 hours — one of the longest calls I’ve ever been on. There are times when there’s lots of hours involved. Lots of sweat.”

New Sight’s department has been dealing with aging equipment in the past, but things are looking up for the team. In March, the county gave the department a new truck worth $235,000 — to go along with their other truck from 2000 that’s still in service.

“It’s been really slow, which is a good thing in our line of work,” Smith said. “But the little bit we have used it, it’s excellent. It’s everything we could hope for. It’s going to last a long time.”

While New Sight is one of the smaller areas in the county, Smith said the fire departments all work together if there’s a major disaster.

“Usually if there’s a major structure fire, we’ll go help,” he said. “So our area doesn’t just consist of New Sight. We do expand out into Loyd Star, Heucks Retreat. I’ve been as far down as Bogue Chitto to a fire.