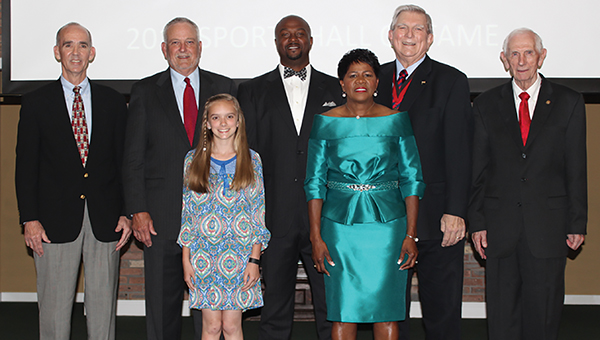 During his illustrious career, the great Wilt Chamberlain was all about awards  and  personal records and  accolades.

Chamberlain was the type of guy who was so hung up on personal achievements that he made a concerted effort not to foul out of games  for the sake of a streak.

Because of his selfishness, his teammates and coaches loathed playing with him. Chamberlain was the epitome of a “me first” type of guy.

Tommy Goodson is the polar opposite of Wilt Chamberlain.

Goodson, a graduate of the class of 1969 at Brookhaven High School, was recently inducted into the William Carey University Sports Hall of  Fame.

His efforts on the diamond and the basketball court led some to call him one of the best competitors to ever play at Carey.
Most athletes would say their entire career centered around being enshrined in the Hall of Fame for their prospective sports.

But Goodson is as humble as they come. He said that though it was special to be recognized for his achievements, he did not go to his alma mater hoping to get into the Hall of Fame.

“I am not an individual guy as far as awards,” he said. “I have always been a team guy. I was very humbled when I got the call.”

So humbled was Goodson, that he told the university he believed they had the wrong guy.

“I felt there were several people that played before and after me  who deserved it,” Goodson said.

He has never been one to put too much into individual awards or accolades. In fact the only awards he recalls winning during his high school career at Brookhaven High were All-District and South State.

“I don’t get too hung up on awards. As a coach I hated giving them. I tried to make all my awards important and not take more time with any  award,” the former coach said.

What he does remember however, is an absolute disdain for defeat.

Even as a child playing pickup  games Goodson was never a fan of losing. He noted that at times his attitude towards losing even got him into trouble with his parents.

“They always made sure I was respectful,” he said. “I hated to lose and I still hate it today.  I competed hard and took everything I did wrong personally.”

One shining example of his hatred of losing, Goodson said, was the district tournament final during his senior year at Brookhaven.

Rival team McComb had just managed to sink a devastating half court heave at the buzzer to win the game. Goodson, being the competitor he is, found a way to express his displeasure.

“I didn’t shake their hands,” he said as he recalled the moment. “I got in some trouble with my parents and my coaches afterwards  about that.”

His competitive mentality did not diminish on the baseball field either. Goodson hated to strike out, particularly if he took one looking.
One of his fondest memories during his playing days at Carey was not striking out his entire freshman year.

When he finally was struck out in his sophomore year against the University of Southern Mississippi, he recalls that it was NFL Hall of Fame punter Ray Guy who fanned him.

“Third strike looking,” he said. “I hated that. I felt myself boil.”

He said that competitiveness and drive will never fade.

“It’s always there. Even today, if I have a task I will keep grinding until I get it done.”

During the early stages of  his coaching career that competitive edge would be tested in the worst way.

Goodson started out as an assistant coach at Brookhaven High in 1974 for a fledgling girls’  basketball program.  The initial year was a tough one for the team as they went 0-17.

This was a new and difficult situation for the young coach and he admitted he considered not continuing. But being the competitor he is quitting simply was not in his nature.

He stuck with it and his teams steadily improved. He won half of his games in his second year and every year after his squads won 20 games or more.

Ten years after his first season, Goodson and his team went undefeated. He said the experience taught him a great deal about coaching and himself.

“When you come out of school you think, ‘I’m a good player, I’ll be a good coach’ but I couldn’t coach. It took me a while to figure out that I need to learn how to teach,” he said.

As he looks back on it, Goodson said the struggle made him a better coach.

Goodson has been in many cities during his playing and coaching career from Tupelo to Pascagoula to Baton Rogue at Louisiana State University as an assistant coach under legend Sue Gunter.

However, he feels he owes a lot to  Brookhaven.

When all is said and done, Goodson said he hopes to be remembered as a firm and fair player and coach.

“I hope at some point in their life young people can look back and understand the reason I did certain things was to help them,” he said.

Photo by Anthony McDougle/American third baseman Graham Smith makes a throw to second during a contest against the Natchez All-Stars... read more