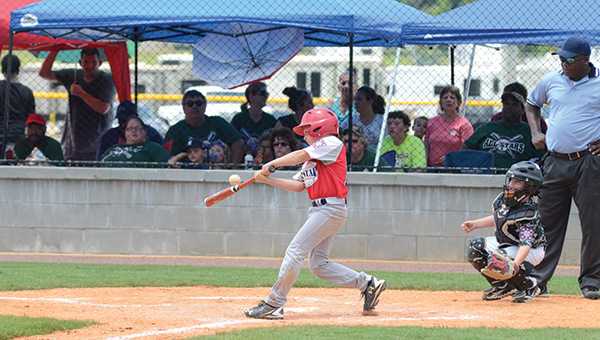 Photo by Anthony McDougle/
American All-Star catcher Bram Wolfe swings and makes contact during his team’s first matchup against the Natchez All-Stars. The Lincoln Americans defeated Natchez in their second meeting to avenge a 15-14 loss and be crowned sub-district champions.

•The Lincoln American All-Stars will advance to face the winner of the North sub-district tounrnament in a best-of-three series. The first game of the series will be Friday at 6 p.m. at the Lincoln Civic Center Baseball Complex. Games 2 and 3(if necessary) will be played at a different location. Time and location of the games are pending. Entry into Friday’s game will be $5.