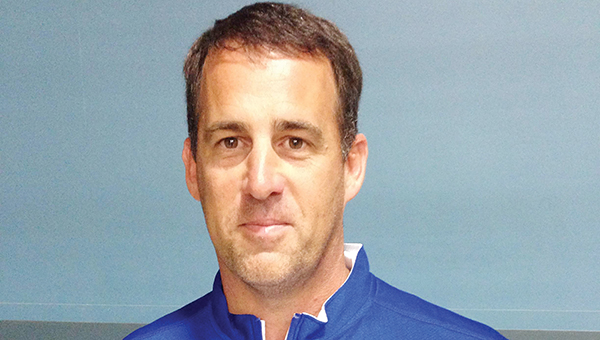 Photo Submitted/
Brookhaven Academy’s Ron Rushing is entering his first year as head coach and athletic director at the school.

Being the “new guy in town” is never easy. It is a challenge socially and mentally that many are not prepared for.

In the ranks of Mississippi prep football, where fans exhibit savage support of their teams, it is even more difficult to handle.

But that is not evident when speaking with Brookhaven Academy’s new head coach and athletic director Ron Rushing.

As he sits at his desk in his office, examining a 7-on-7 session against Centreville Academy from earlier in the day, he exudes confidence.

He carefully picks through every play of the session, going through each miscue and error with the precision of an experienced, sure-handed surgeon.
When he speaks, his assistant coaches listen intently. His players tune in.

Based on their reactions to him one would believe he is entering his fourth or fifth year at the helm.
But realistically, Rushing is indeed in a tough situation.

Coming in as a former head coach at a successful program in Cathedral of Natchez, the situation he is in now is rather new to him.
With a 60-17 overall coaching record, he inherits a Brookhaven Academy football team that  is on a 14-game losing streak.

However, with their most recent championship coming in 2012 winning is definitely in the culture at BA. It is a culture Rushing says he intends to bring back.

“It is going to happen,” Rushing says. “I’m not sure when but it will happen.”

Rushing also said he has set realistic expectation for his team for the upcoming season.

“Our immediate goals are to win that first game, then a district game, and hopefully after that things will start to snowball,” he said.

He acknowledges he and his team are in a tough situation though. But, he spoke highly of the hard work and dedication his team has put into being better this summer.

“I just can’t say enough about these 17 guys. They are in here every day lifting weights and doing everything we ask of them,” Rushing said. “I am really impressed with their work ethic so far.”

Assistant coach Chad Lessard said Rushing has been very hands-on with his team so far, and it has shown.

“The kids are responding to his leadership,” he said of Rushing. “He is always interacting with them, showing them techniques. He’s very calm about helping them fix what they are doing wrong.”

“He’s got the gameplan. Repetition is the key and he is going to make these guys rep it until they perfect it,” he said.

As far as adversity, Rushing also realizes he and his team will encounter plenty in the upcoming year.
However, he said they have talked about it and are doing everything to be ready for it once it comes.

“A lot of it is preparation and hard work,” he said. “The harder you work the harder you fight adversity when it comes.”

In summation of his thoughts on adversity he referenced a quote he had recently posted on his Twitter account.

“If it is important to you, you will find a way, if not you will make an  excuse,” Rushing said. “That is our motto this year and we are going to fight through whatever happens.”