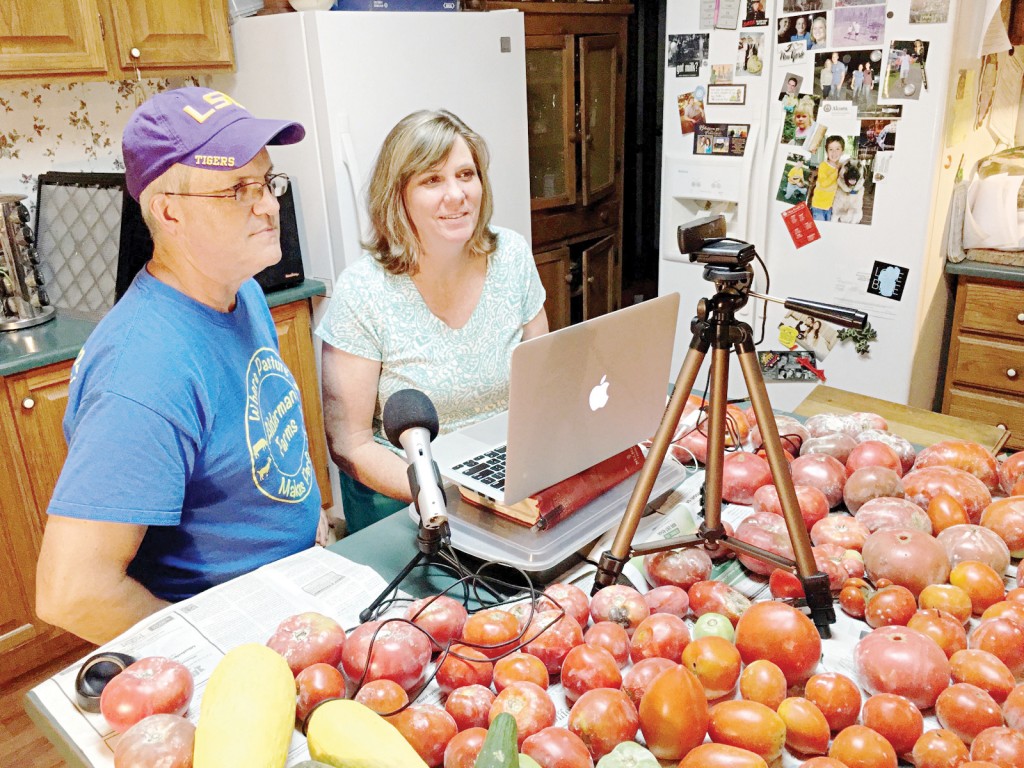 Photo submitted/Tommy and Patti Alderman will share their farm experiences on their Alderman Farms Live YouTube channel every Sunday at 5 p.m.

Alderman Farms started their YouTube channel in 2012, but they’ve recently taken it to another level with Alderman Farms Live. The show, where Tommy and Patti Alderman share their experiences on the farm and answer questions from the audience will air on Sundays at 5 p.m. on youtube.com/aldermanfarms/live.

Originally from Baker, Louisiana, the Alderman family moved to Brookhaven in 2000. Tommy Alderman said they’d already had experience homesteading from their time in Baker, but as they continued to produce, Alderman found there was a real demand for naturally raised produce.

“More and more people are beginning to care about where their food comes from,” Alderman said. “There’s a growing customer base out there — people who for example don’t mind eating meat but they want to know the animals lived well. They want to know they were cared for and lived like animals were supposed to live.”

“Basically we’re about doing things the way god intended us to do. We raise everything as naturally as possible with no chemical input at all. We don’t use antibiotics on our animals unless one gets sick,” he said.

“Here’s the thing. Our animals don’t get sick. We rarely have a sick animal because they’re not cramped up in tight quarters with no ventilation. They’re eating grass and living in the woods. They’re happy and healthy.”

Alderman said it was just over the past three years that they’ve started to develop a customer base for their produce, and every step of the way Alderman Farms has been active in social media.

His interest in computers, he said, came from his father.

“My dad, he’s been deceased since 2005,” Alderman said. “He would be 93 this year. If my dad was alive right now, he would be on Facebook. He would be on Twitter. My dad was one of those kinds — and it was unusual for his generation — that the second some kind of PC came out, my dad had one.”

Their decision to start a live show came from their partnership with The Homestead Network. Alderman said everything happened in about two days.

“I connected with some folks down in Williams who have a Youtube channel and saw they were part of something called The Homestead Network,” Alderman said. “It looked like a collection of 11 Youtube channels in the similar niche as ours. Most were about homestead self-sustainability and that kind of thing.”

Alderman said he contacted the channel through their website about getting a slot on their live lineup.

“It’s a little nerve wracking because we’re new at this. I’ve done a few Facebook live videos, but using my phone and just a minute or so. So every day we’re taking notes about what we’re trying to do,” he said.

Alderman said his favorite aspect of live video is its interactive nature. The two are able to answer questions as they come in live from people in the audience.

“We hope to connect,” Alderman said. “People are looking for real people and that’s what we want to be. Just be genuine and we’ll think people will respond.”

Q: What’s wrong with the bridge on Bogue Chitto Road? When will it be opened? A: The bridge was closed June 28... read more