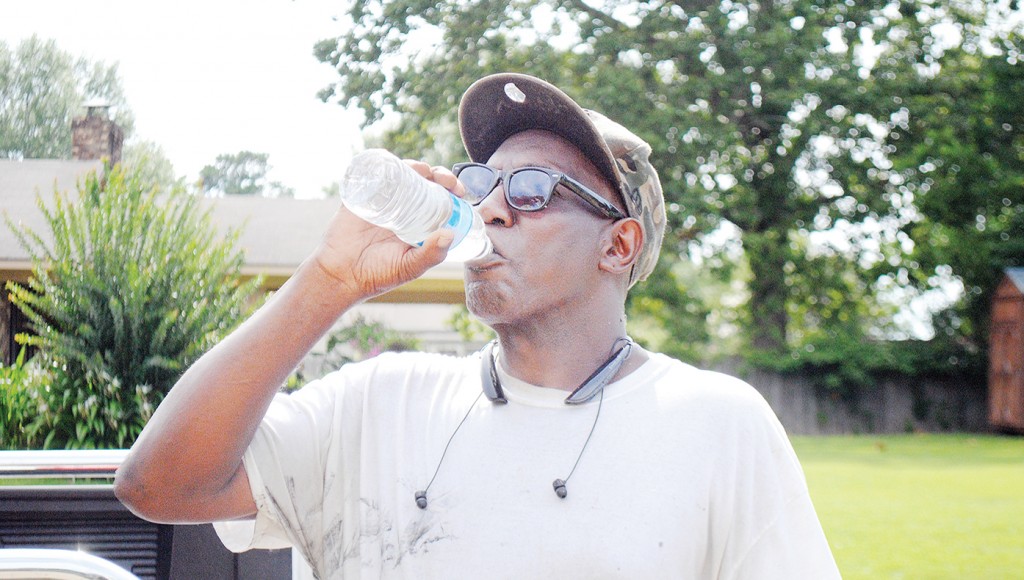 Photo by Aaron Paden/Lawncare worker William Carter stays hydrated Wednesday during a hot day of work. A heat advisory issued for Southwest Mississippi will remain in effect through 7 p.m. today.

A heat advisory issued for portions of Mississippi, including Lincoln County, will remain in effect through this afternoon, although dangerously hot and humid conditions could persist during the midday and afternoon hours for locations along the I-55 corridor through Saturday.

Dangerous heat will stick around for the next several days with the heat index approaching 110 degrees. Highs will run in the mid to upper 90s combined with high humidity, which will result in peak heat index readings of 106 to 110, according to the National Weather Service.

High overnight temps make a heat wave especially unbearable for people and pets, with little relief from heat and humidity.

That’s one of the criteria the weather service uses for advisories, issuing one when the heat index does not fall below 75 degrees nightly; reaches 105 for two hours or reaches 108 at any point.

Heat stress could lead to heat exhaustion or heat stroke for those working outdoors. Medical professionals stress staying hydrated to beat the heat.

Water is good, but a liquid with sodium and potassium, like a sports drink, is even better, said Paige Chisolm, a nurse practitioner with King’s Daughters Medical Center.

Chisholm suggests pickle juice for athletes before and after training since sports drinks tend to have too much sugar.

Here’s some tips for dealing with scorching hot days:

• Know the signs and symptoms of heat exhaustion and heat stroke

• Wear lightweight and loose fitting clothing when possible and drink plenty of water.

To reduce risk during outdoor work, the Occupational Safety and Health Administration recommends scheduling frequent breaks in shaded or air conditioned environments. Anyone overcome by heat should be moved to a cool and shaded location.

Chisholm, who works in the emergency room, has not seen any cases of heat stroke so far this summer, but several patients have been treated for heat exhaustion and severe second-degree sun burns.

Residents should know the three stages of heat-related illnesses and take precautions, she said.

Heat cramps are mainly seen in athletes and people who sweat heavily. Consuming a sports drink with sodium and potassium can usually help people avoid cramps, which mainly occur in the abdomen, back and legs.

Heat exhaustion and heat stroke are much more severe and require medical assistance.

Symptoms of heat exhaustion include light-headedness and tunnel vision, a decreased pulse rate that means a reduced blood flow, pale and sweaty skin and headaches.

People with those symptoms should come to the ER for treatment.

“By the time you get thirsty, you’re already dehydrated,” she said. “If your body is triggering that thirst, it’s needing the fluid. Once you get to heat exhaustion, you’re not going to be drinking enough water. You need to be seen. It can start affecting kidney functions.”

Heat stroke is a step further and affects mostly the central nervous system.

Patients with heat stroke have usually experienced cramps and symptoms for heat exhaustion.

“They ignore the other two. They have cramps, they brush it off,” she said. “Usually, they get to heat stroke because they ignore the heat exhaustion symptoms.”

Patients with heat stroke should be seen by medical personnel immediately, she said.

If a person must be outside, Chisolm advises limiting exposure. “Take frequent rests,” she said. “And keep the sun from hitting directly on your skin. The sun will dry the sweat and you won’t realize your getting dehydrated.”

Sunburns can occur even when the sun isn’t shining directly on a person’s skin. “You don’t realize on cloudy days, you can get sunburned,” she said. “People will stay out longer and not use sunscreen.”

Lastly, Chisolm warned about mixing too much sunshine with cold alcoholic beverages.

Drinking too much alcohol in the heat can put a person at risk for dehydration quickly. “It allows your body temperature to change more rapidly,” she said. “People out drinking in the sun need to be extra cautious.”

Elderly individuals and young children are more at risk for heat-related illnesses, she said.

Pets can also be affected by the severe heat, said Beth Adcock with the Brookhaven Animal Rescue League. 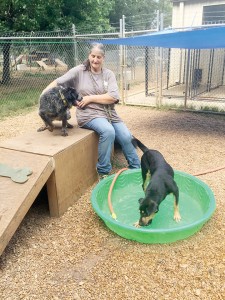 The non-profit animal welfare organization has 60 dogs and puppies and 22 cats and kittens currently at the BARL Adoption Center.

While the kennel area isn’t air-conditioned, they have huge fans to keep the dogs comfortable inside. Fourteen doggie doors facing east and west are kept open on the indoor/outdoor pens and garage-type doors facing north and south on the front and back of the building  are pulled up, which offers a nice cross-flow of air, Adcock said. The outdoor part of the indoor/outdoor pens have sun shades.

Shelter volunteers use kiddie pools and sun shades to keep the canines cool.

“All our dogs go out into the exercise yards during the day from approximately 11 a.m. to 3 p.m. so they can all splash in the pools,” she said.

Adcock urges pet owners to be aware of the heat and take precautions for their animals.

“Concrete, metal and asphalt can become extremely hot during the summer,” she said. “ These hot surfaces can burn a dog’s foot pads, causing them severe pain.”

When the air temperature is just 87 degrees, asphalt can be at least 143 degrees. That’s in direct sun with no wind. To compare, an egg can fry in five minutes on pavement thats 131 degrees.

She suggests walking dogs on grass.

“I once saw a dog that was fetching on hot concrete,” she said. “The owner had no idea the dog’s paws were hurting until later in the evening when the dog started licking her paws, which were burned and ripped. It required a vet visit.”

Pet owners need to know the signs of heat stroke in their animals, she said.

“They should contact their veterinarian immediately if they suspect they have heat stroke. It can be deadly.”

Pets should never be left in vehicles unattended.

“Triple-digit temperatures are affecting most Mississippians, and while the first reaction is to crank down the A/C, remember that heating and cooling costs make up more than half of your monthly energy bill,” said Bill Howard, Entergy Mississippi customer service representative in Brookhaven. “By taking energy-efficient measures now, your air conditioner will run less and that, in turn, will help keep your bill down as the summer heat continues.”

Howard advises several ways to save energy and keep your costs lower without sacrificing comfort:

· Get your A/C inspected. Inspectors can make sure your system is leak-free and operating as efficiently as possible. Entergy Mississippi customers can sign up for the Entergy Solutions residential tune-up program and get incentives of up to $100 on an air-conditioning tuneup. Also, don’t forget about air filters — some units require monthly cleaning or replacing.

• Set your thermostat at 78 degrees or the highest comfortable temperature. Every degree lower than 78 can raise your bill as much as 3 percent. So if you crank down the A/C to a cooler 72 degrees, you’ve already increased your bill by 18 percent.

• Buy a programmable thermostat. As energy usage rises, costs also rise. If you spend most of your day outside of the house, set your thermostat to automatically shut off or raise the A/C setting when you’re away.

• Use fans to cool off, but remember – fans cool people, not rooms. Ceiling fans, box fans and oscillating fans use very little electricity and circulate the air, which helps you feel several degrees cooler. Just remember to turn them off when you leave the room.

• Close blinds, shades and curtains to keep the sun out and the cool air in. Also, close air conditioning vents in rooms that are not in use.

• Seal cracks and holes around doors, windows and duct work. Weather stripping and caulk will help keep the cold air inside the house and the hot air outdoors.

To avoid the billing spikes that extreme temperatures can bring, Howard suggests customers sign up for level billing. “That way, you can better control your monthly budget,” he said.

Cameras in the works for LCSD buses