Husband and wife team Nathan Kepner and Morgan Tsu-Raun will appear at Haven Theatre on July 16 at 7 p.m. in a show that Kepner said will be a fusion of magic and the circus arts.

“It’s a two-person show that has everything from hula-hooping to juggling, mind reading and illusions,” Kepner said. 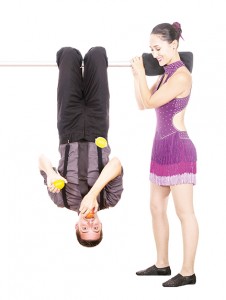 Photo submitted
Husband and wife team Nathan Kepner and Morgan Tsu-Raun will be performing at the Haven Theatre on Saturday.

Their show is called the Crescent Circus, and the idea to bring the show to Brookhaven comes from a new company founded on May 30 called Highway 55 Events.

Founders Troy Douglas and Trey Waterloo were brainstorming for events to bring into Brookhaven when they found Kepner’s show online. Douglas said he was fascinated by slight of hand as a child when he would pass by the magic shop in Riverwalk Mall in New Orleans and wanted a similar experience to come to Brookhaven. Kepner was a natural choice.

“Google is a wonderful thing,” Douglas said. “We had actually seen some Youtube videos of his. We just reached out to him based off of his Youtube videos.”

Kepner said he’s been doing magic since he found a magic set while exploring his grandfather’s basement as a child. His favorite magician growing up was Lance Burton while watching the World’s Greatest Magic on television. Kepner said he would go on to compete and win Burton’s stage competition at the World Magic Seminar Convention in Las Vegas when he was 17.

While going to Pennsylvania State University in 2009, Kepner met his wife Tsu-Raun, where they joined forces to create their fusion act. Tsu-Raun brings the hula hoops and acrobatics while Kepner brings the illusion and sleight of hand. Tsu-Raun also demonstrated her Hula-Hooping skills on the Tonight Show in 2013. But it’s bringing the interactivity of a live performance to the whole family that Kepner enjoys the most.

“My favorite part is being able to bring live entertainment to an audience that includes the entire family,” Kepner said. “There is not a lot of that today. There are very few opportunities where you can bring the entire family or that everyone will enjoy. It’s not a kid show by any means, but it is kid friendly. Kids get to be involved and adults get to be involved.

“There’s an interaction in live entertainment that you don’t get elsewhere,” he continued. “I get to make the audience laugh and they get to make me laugh. It’s a two way street — a more dynamic experience.”

Douglas said he hopes people see Brookhaven continue to grow as a venue for events.

“You can definitely see more family events coming to Brookhaven,” Douglas said. “With Hwy. 84 and I-55 right there, there’s no reason we can’t get more people doing a pass-through show. Depending on the turnout this year, I’d like to see Nathan come back next year with another show.”