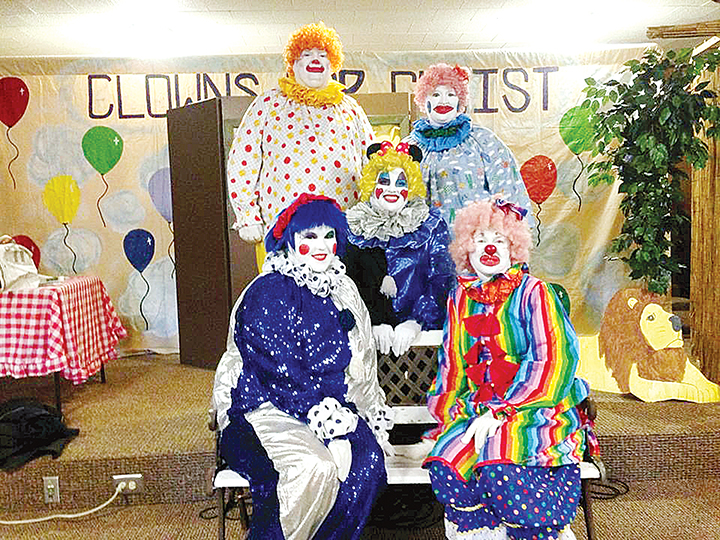 Starting today, Brookhaven Church of God will again host Clowns for Christ — a show where five clowns and a cast of puppets teach children about God.

Deborah Bowman has been organizing Clowns for Christ for over 20 years, but the show has been on a five-year hiatus as the membership at BCOG got older. But Bowman said it’s time to bring the show back and do some outreach.

“Our theme this time is ‘Believe’,” Bowman said. “We want to make sure our children understand basic truths about God.”

The event will last for three nights — Thursday through Saturday from 6:30-8:30 p.m. The clowns will deliver a different message each night: to know Christ, to grow in Christ and to go out and tell others about Christ.

“We believe that he’s commissioned us — that we need to share Christ with others,” Bowman said.

The church will again meet Sunday at 11 a.m.

“Sunday is our Friends and Family day,” Bowman said. “We’re trying to encourage the ones that came during the week to bring family members and friends.”

Bowman said the response from children to the clowns over the years has been positive, though she acknowledged that there are a new generation of children to teach.

“We’re just seeing how they respond to the clowns again,” Bowman said. “Generally they love it, and it’s not just clowns. We have black light puppets.”

One puppet, Harvey the Rabbit, has been a recurring character since the show began, and will continue the tradition this year. Bowman said each skit will revolve around the message they want to teach that day.

“Several are taken from parables in the bible,” Bowman said.

Bowman said she believes there is something for all ages to enjoy in the shows, and she hopes for a good turnout, but in the end she said the people who are meant to come will come.

“We believe that God will send who needs to come and we’ll do it to the best of our ability,” she said.

Brookhaven native Katie Dixon said she disappointed herself and her state with her fried chicken during Wednesday’s episode of the... read more