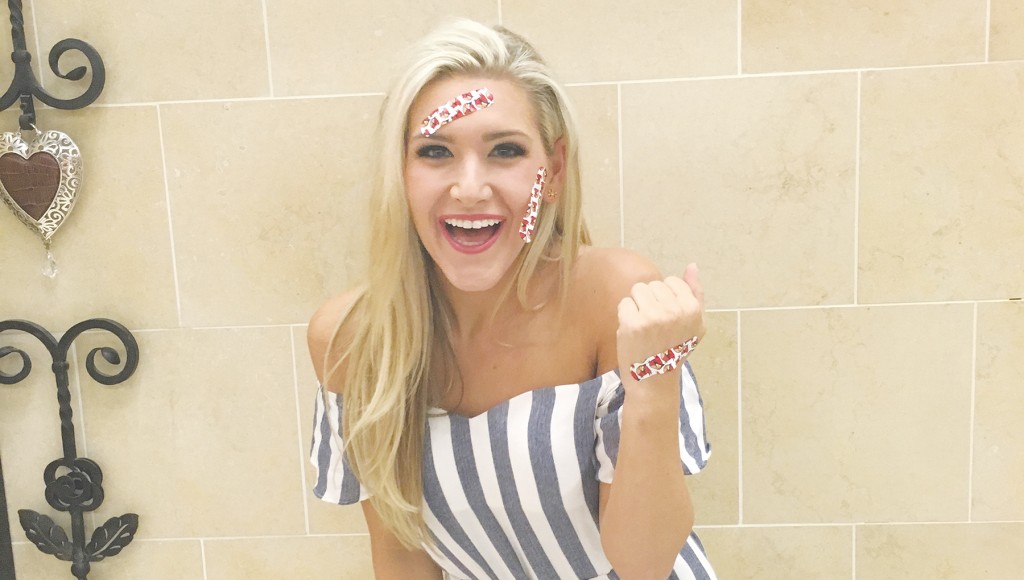 Photo submitted/Miss Mississippi Laura Lee Lewis is collecting boxes of latex-free adhesive bandages for the patients at Blair E. Batson Hospital for Children in Jackson so they’ll have plenty of colorful and fun bo-bo covers to choose from after getting a shot or having an IV. The public can drop off their donations of adhesive bandages at the homecoming reception to be held Saturday, July 23, from 2-4 p.m. at the Mary Jane Lampton Auditorium at 110 South Jackson St.

Miss Mississippi Laura Lee Lewis is on her way home for her first official visit back since winning the crown June 25 in Vicksburg and she’s asking for some help from her Lincoln County extended family.

She wants some fun, sticky bandages and lots of them. “And not just a generic, skin-colored Band-Aid to put on a bo-bo,” she said.

Lewis, 23, is collecting tins and boxes of latex-free adhesive bandages for the tiny patients at Blair E. Batson  Hospital for Children in Jackson.

“I want to give them the opportunity to open a drawer and pick out a Band-Aid that’s fun, that has a character on it, a cartoon on it, a smile on it.,” she said. “In that moment, those children are going through something that’s scary. They’ve just had their finger pricked, or they’ve been given a shot or an IV needle or something that’s very painful a child is traumatically going through. Giving them the opportunity to pick a Band-Aid that’s just fun gives them a moment of happiness for that child.”

The public can drop off their donations of adhesive bandages at the homecoming reception to be held July 23, from 2-4 p.m. at the Mary Jane Lampton Auditorium at 110 South Jackson St.

Lewis, the daughter of Mark and Lorin Lewis, will be signing autographs, posing for pictures and giving a lot of hugs during the event.

“I have just been counting down the moments until I can come home. Brookhaven is my family,” she said. “I’m not living there right now, but it’s still my home. It has all these people who have really impacted my life since I was a little girl and who told me I was special at time I felt like I wasn’t. Brookhaven just has that special place in my heart I can never forget.”

Prior to winning the Miss Mississippi pageant, she was living in Madison while she observing sixth- through eighth-graders last semester as part of her course load at Mississippi State University to become a teacher. She’d planned to student teach third and fourth grade in the fall, but her senior year at MSU is on hold as she travels the state as Miss Mississippi and prepares for the upcoming Miss America pageant in New Jersey Sept. 11.

While back in Lincoln County, she’s looking forward to attending services at First Baptist Church Brookhaven, where she’s still a member, and interacting with all the people who have reached out to her through text messages, emails, phone calls and social media. “They’ve been so encouraging,” she said. “To actually get to see them and hug them and smile at them and get excited with them about Miss America. I’m getting chills thinking about it. To be home and be at my church and my church family and my Brookhaven family.”

Lewis said the Miss Mississippi crown has been a dream come true, as it will help her become a teacher and be a “game-changer in the life of a child,” she said.

She’s accumulated more than $33,000 in scholarship money from the state pageant and has the opportunity to be awarded more with the Miss America program.

“Thanks to the Miss America organization and especially the Miss Mississippi organization, I will go into my master’s and ph. D. degree debt free,” she said.

Lewis will leave for Atlantic City in late August to prepare for the national pageant, which will be broadcast on ABC Sept. 11 starting at 8 p.m.

Tickets are on sale for a send-off celebration for Lewis, which will be Aug. 20 at noon at Vicksburg City Auditorium. Tickets are $25 and include a fashion show and lunch. Seating is limited. Tickets should be reserved by Aug. 15. by calling 662-542-2862 or 662-260-0711. Tickets can also be purchased through the Miss Mississippi office at 601-638-6746 Monday-Thursday from 1-4 p.m. and picked up at with will-call office the day of the event.

Those who attend will get a sneak peek at Lewis’ wardrobe and talent for the Miss America pageant.

Registration packets are available at the Brookhaven School District central office through Monday and can be picked up by parents... read more