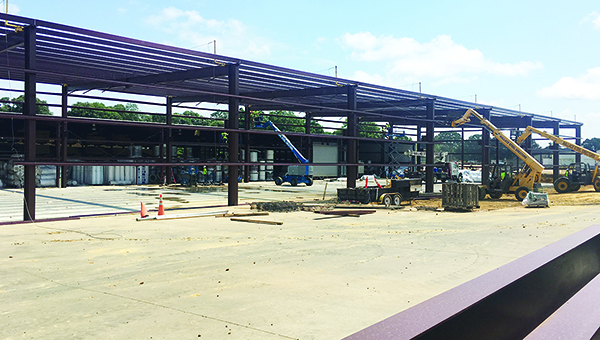 The Reed’s Metals expansion is being completed in two phases that will consist of constructing 79,000 additional square feet of building.

Reed’s Metals, a metal roofing and building manufacturer in Brookhaven, will soon provide the community and nation with the highest level of service available, company officials said.

Reed’s Metals President and CEO Bernie Reed expects the company to explode with business starting in January with the expansion of its current Brookhaven facility.

“We are in the process of expanding in two phases,” Reed said. “Phase 1 is close to being finished — hopefully in the next 45 days.” 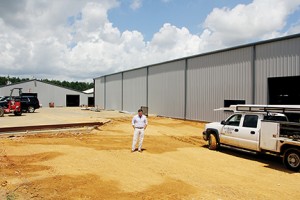 “One of the reasons we are doing Phase 1 is because our sales are up 33 percent over last year in the component part of the business,” Reed said.

The first step of the expansion will help Reed’s Metals keep up with the demand it faces each day, Reed said. It will deal with producing products on the component side including roofing, purlins, insulation, roll-up doors and metal trusses, he said.

“We haven’t been able to keep up,” Reed said. “We needed more room and machines. We are really excited about this phase because it will allow us continue providing the service that we know built this company. We want to make sure we make all the products correctly and accurately, and provide fast service. We’ve always prided ourselves on ‘order today, pick up today,’ but we truly like it to be ‘order it and pick it up in 15 minutes.’”

Phase 2 of the Reed’s Metals expansion will allow the company to grow its product line to an industrial level.

“It’s going to allow us to make build-up frames for the bigger industrial rigid frame buildings,” Reed said. “Phase 2 is going to be a very impressive building.”

Plans for the second building in the expansion outline a 48,000-square-foot structure that will be 28 feet tall, 80 feet wide and 600 feet long, Reed said. The second part of the expansion will feature overhead cranes and cost approximately $2 million.

“Once this is all in place, it’s truly going to allow Reed’s Metals of Brookhaven to service 48 states with metal buildings, which is extremely exciting for me,” Reed said.

In addition to giving Reed’s Metals a presence in 48 states, the expansion will allow the company to provide communities throughout the country with jobs.

“Once it’s almost completed, we’re going to hire salesmen that live in many different parts of the country to work for Reed’s Metals and sell our product,” Reed said. “It is hard for me to put a number on the total job positions I hope to create with this expansion, but I expect it to be many, especially here in Brookhaven. If things go as planned, I hope to explode. I’m making a big investment and I’m hoping for a great return to create many more jobs and do more for the community.”

Reed foresees the expansion making a huge economic impact in Brookhaven, Lincoln County and Mississippi, not just from the number of jobs it will create, but also in the revenue stream it will build.

“I already feel like we are the biggest metal roofing company in the state of Mississippi,” Reed said. “I have nine locations and we’re going to build the metal buildings for those locations out of Brookhaven. The expansion will allow us to sell more products throughout the country. That will increase our revenue here, which in turn will bring a lot of tax money to the county.”

Reed is looking forward to providing customers with the best experience possible through the company’s expansion.

“I feel like the experience the customer is going to get — it’s going to exceed their expectations,” Reed said. “That’s what drives me. I love when customers have a great experience. I don’t really think about the revenue side. I just think how amazed they will be if they can pull in, get a whole custom cut roof and leave in 15 minutes.”

Looking back on the last 18 years, Reed cannot believe how far the company has come.

“It’s huge,” he said. “This is going to put us on a whole other level. Seeing this expansion come to life is very rewarding because when we started out in 1998, we were focused on one county. Then we got pretty competitive in the state, now we’re a big player in the region. Hopefully we’re about to be a national competitor.”

Reed credits the success of Reed’s Metals to an inner drive to accomplish goals and give back to his community.

“I don’t take anything for granted,” he continued. “I try to be very grateful. I know I can’t take anything with me, but I truly try to be a good CEO of what I’ve been blessed to manage. That’s just the way I feel. No matter where this thing ends up, I just want to treat people fair and give back.”