Summer jobs give teens a leg up 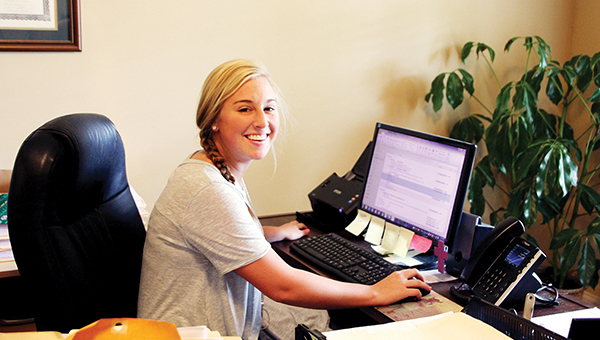 From raw numbers alone, May seemed to be a bad month for unemployment in Lincoln County. But seasonal trends tell a different story. At the end of every school year, students from high school and college enter the job market looking for employment.

“It doesn’t matter what type of job you have, it teaches a lot of responsibility,” Patterson said. “The responsibilities may differ from job to job, but it helps students mature. It gives you experience. It teaches you to be on time.”

Copiah-Lincoln Community College freshman Brad Jasper, who works as a delivery driver at Gregg’s Office Supply on Jackson Street, agreed with Patterson’s sentiment that having a job as a student prepares you for life after college.

“They (Students) will gain new relationships, better opportunities and experience with a job,” Jasper said. “It helps them know what they need to do for their next job and what they need to improve on for a bigger and better job.”

Patterson said that a majority of her peers have some type of job.

“People I know that don’t have jobs, you can tell the difference in their maturity and responsibility level,” Patterson said.

Patterson obtained her job after hearing of the open position from one of the office’s clients.

“One of my friends — her mom’s business is one of their clients,” Patterson said. “I don’t really have a job title. I assist her (Stamps) with anything she needs help with.”

After being exposed to the world of accounting for the last two and a half months, Patterson has decided to pursue a degree in accounting upon her high school graduation.

“Pursuing accounting is something I am considering,” Patterson said.

Patterson began contemplating a career in accounting prior to working at Stamps’ office, but after working there her decision has been solidified.

“Working as a student gives you experience,” she said. “That is one of the biggest benefits. Working at an accounting office has taught me to triple check myself.

It helps with the decision-making. This kind of job is very stressful. Everything is confidential.”

Jasper began working at Gregg’s Office Supply in Dec. to earn his own spending money.

“They posted something on Facebook and my mom had showed it to me,” Jasper said. “I had to go by there and interview for the job.”

Jasper’s responsibilities are to assemble and deliver furniture, help with customers and odd jobs around the business.

In the fall, Jasper will begin studying business at Co-Lin, at career choice he selected after being exposed to a multitude of business concepts at his part-time job.

“I get to be around Mrs. Gwen and Mr. Ricky, the owners of Gregg’s Office Supply, and listen to what they do to run their business,” Jasper said. “The people there are really good people. It’s a family-based environment.”

Fernald said a person is defined by their commitment to the work that they do.

“A quality of a man’s life is in direct proportion to his commitment to excellence,” he said. “Vince Lombardi said that, and I believe that to be true.”

Matt Shell, director of the Brookhaven Parks and Recreation Department, said they hire about seven full-time summer workers every year. The teenagers can work at a variety of jobs, like being the umpire or keeping scores at ball games, helping with summer camps or cutting grass and landscaping.

It keeps the teens busy, while also giving them a paycheck.

“We’re trying to give the kids something to do in the summertime, and keep them busy and let them earn a little money.”

Shell was impressed with the teenagers who applied for jobs this summer.

“The teenagers that want to work are some of the best kids that you want around,” he said. “I’d recommend them to any future employer.”

The Fair Labor Standards Act was enacted in 1938 and has been amended several times. In the wake of the Great Depression, it was an important piece of legislation that set a minimum wage, set a 40-hour workweek and implemented overtime. According to Becky Vaughn-Furlow, a retired executive vice president and human resources director of Trustmark National Bank and a columnist for the Clarion-Ledger and The Daily Leader, the bill also set limitations on employment for minors.

According to Vaughn-Furlow, 14 is the minimum age for non-agricultural work, and there are limits to minors under the age of 16. Hazardous work is prohibited for minors of all ages.

“There are a few working situations with no age limit,” she said. “Newspaper delivery, performance in radio, tv or the theatre and working in a business owned by parents — unless it is classified as hazardous. Also children under 18 can work as babysitters and performing minor chores in a private home.”

Sometimes students will take unpaid internships as well, and those are heavily regulated by the FLSA. Unpaid internships must be educational, must be to the benefit to the interns, must not displace regular employees, cannot directly benefit the employer and the interns must understand that they are not entitled to wages. Interns are not guaranteed employment at the end of an internship.

It’s also very common for enterprising young people to go into the business themselves, doing odd jobs like babysitting or yard work for cash.

Fernald said he started working at a young age himself, and he doesn’t believe that there is such a thing as menial labor.

I was taught that by my father, and I’ve always told my children the same thing. I don’t care if you’re a ditch digger. Just be the best ditch digger they put on the face of the earth.”

According to a 2006 study published by Brigham Young University, a reasonable amount of part-time work can improve a college student’s performance in higher education as well. Students who take part-time jobs typically report a significantly higher GPA than those who don’t, as long as the number of working hours does not exceed 15 per week.

The study went on to say that full-time workers are 10 percent less likely to receive a degree, but working 20 hours or less did not effect drop-out rates for colleges. Studies also found on-campus employment to be beneficial for students.

Landing the job in the information age

In the span of a single generation, the internet has expanded to all walks of life, and social media can present unique challenges to job seekers.

Teen applicants should always be aware that online privacy is an illusion, and words or photos that seem like a good idea posted in fun, could be the catalyst that lands their resume into the reject pile.

“In my experience of seeking younger employees out, social media is the first thing I have referred to,” she said. “If the teen seeking the position shows any type of foul language on their posts, that is an immediate red flag. Crude behavior posted online for everyone to see shows lack of respect for themselves and their superiors, whether it be their parents or potential employers.”

Nations advises that teenagers who want to put their best foot forward should keep their social media accounts private, for the good of their future job searches as well as their personal safety.

“Every generation has their own hurdles,” she said. “Social media and the negative effects of it, I believe, is this generation’s.”

Nations suggests that job seekers Google their names from time to time, just to see what a potential employer may see if they do the same.

Don’t trash talk former employers on social media, she said. Companies don’t want to hire someone who has publicly ridiculed an employer, she said.

Once a teen has a job, don’t ever lie about a family emergency or illness to get out of work and then post photos of the time away from the office. That’s an easy way to get fired, she said.