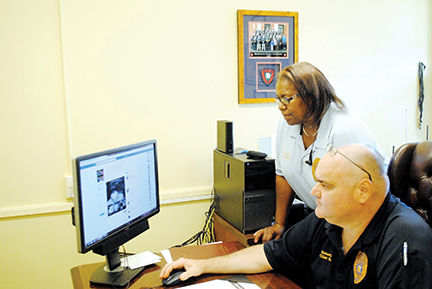 Photo by Aaron Paden/Capt. Clint Earls and Sgt. Penelope Banks go through the department’s Facebook page Wednesday as part of their daily schedule in a new effort to connect to the community through social media.

Detectives with the Brookhaven Police Department will be spending more time monitoring their messages on Facebook.

Police detectives are available to answer questions and to respond to comments and private messages on the Brookhaven Police Department Facebook page between 8 a.m. and 4 p.m., as long as they aren’t all busy working cases.

The response from readers on the initial post July 13 has been overwhelmingly positive, with 305 likes, 55 shares and 33 comments, all showing support toward the move.

Capt. Clint Earls said the move was part of the department’s continuing efforts toward community-oriented policing, something he said Police Chief Bobby Bell is a huge proponent of.

Community-oriented policing is a program established from the Violent Crime Control and Law Enforcement Act of 1994, where the Community Oriented Policing Service was established within the U.S. Department of Justice.

Earls said it’s all about getting officers to interact with the people in their community.

“It means officers stopping and taking the time to talk with people,” Earls said. “It’s to get the officers out of the car and more connected with the community on a personal level.”

Earls said half of the battle of helping somebody is knowing who it is you’re helping.

“That officer, if he’s connected with the community on a personal level, he knows more of what’s going on in that community,” he said.

Earls said the Facebook page was opened about a year ago, and it serves as more than just a public relations platform for the department. Police will often use the page to warn residents of crime trends in the community and to make appeals for information.

One Tuesday post reported two auto burglaries in an apartment complex on North Jackson Street. Detectives said readers could call the department or send a private message through their Facebook page if they had any information. Earls said their private messages are read by the detectives themselves and are kept confidential.

Earls said the page also gave residents a chance to send information and photos quickly from their smartphones.

“Somebody may have eyes on something we can’t get our eyes on, such as a tag number, vehicle or suspect,” he said. “In today’s time, cellphones are used to record the police, and we don’t mind that. But there’s also times when those same cell phones can capture something that can be useful to us.”

For those not connected through social media, the department still accepts information through CrimeStoppers. Callers can give information to law enforcement anonymously by calling 601-823-0150 and could be eligible for a cash reward.