Deputy to school officials: ‘You must be prepared’ in an active shooter situation 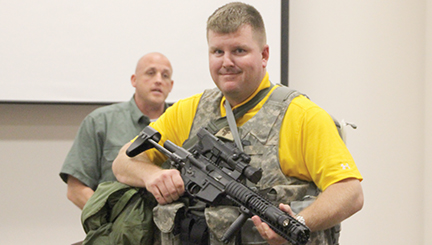 Photo by Alex Jacks/Bogue Chitto principal Jay Rayborn stands dressed out in the gear law enforcement would don during an active shooter situation.

Gaskin said he hoped the class would allow the sheriff’s office and the school district to be on the same page if an active shooter were to enter any of the four county school campuses.

Lincoln County School District Superintendent Mickey Myers introduced the five law enforcement officers by sharing his disbelief in the actions of those around the world.

“I never thought that I would live in an era where we consider law enforcement as an enemy,” Myers said. “All five of these guys here today will come whenever they are called. They’re supportive. What I want to do is get them to come to our schools more often. Come read a book to our children. We want the kids of Lincoln County to understand unequivocally that you’re a friend. You’re not an enemy.”

The law enforcement officers began the class by defining an active shooter. 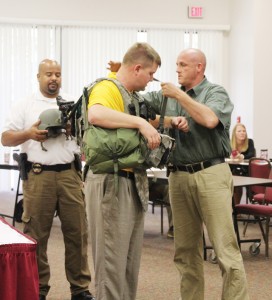 Photo by Alex Jacks/Deputy Jason Gaskin and investigator Damian Gatlin help Rayborn into the bulletproof vest an officer would wear while tracking down an active shooter.

“An active shooter is an individual actively engaged in killing or attempting to kill people in a confined and populated area; in most cases, active shooters use firearms and there is no pattern or method to their selection of victims,” according to the United States Department of Homeland Security.

Gaskin led the active shooter discussion by walking the class through each step an official should take during a potential situation.

“Be aware of your environment and any possible dangers,” Gaskin said. “This is an everyday practice guys. Take note of the nearest two exits in any building you are in.”

“As a last resort, attempt to take an active shooter down,” Gaskin said. “If a shooter is in close range, you have a greater chance of survival if you incapacitate him or her. George Washington said during the Revolutionary War, ‘The American people are so great that we will die on our feet before we live on our knees.’ Does that make sense? Don’t ever let Jason Gaskin catch you begging for you life on your knees. You fight. You do something.”

Gatlin reviewed several of the most known active shooter incidents including Columbine, the Pearl High School shooting and a Luby’s shooting in Killeen, Texas.

“You are the ones that the kids are going to follow in a situation like this,” Gatlin stressed. “You must be prepared.”

Much to see, do for retirees in Brookhaven

Photo By Donna Campbell/Several retirees often gather on the second floor of The Inez to put together jigsaw puzzles and... read more