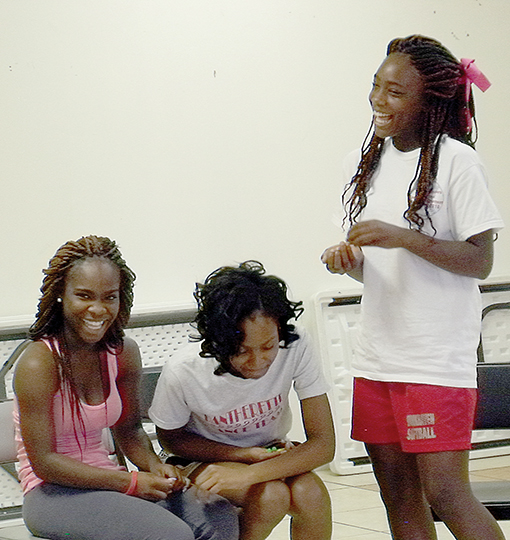 The organizers of a mentoring program that matches young girls with successful, dedicated women will host an empowerment workshop that will cover topics such as peer pressure, self respect and cyber bullying.

The iWin Back to School Workshop for Girls will be Aug. 6 from 11 a.m. to 1 p.m. at the Lincoln County library.

Refreshments will be served and door prizes given away.

The empowerment workshop will serve as a kick-off for the third year of Rising S.T.A.R.S. for Christ, a program founded by Falana McDaniel, a teacher from Brookhaven. She serves as the executive director.

While registration for the program is available during the kick-off, it’s not required to attend the workshop.

Rising S.T.A.R.S. for Christ’s mission is to “empower and inspire young ladies for the Glory of God,” McDaniel said.

Through the program, female mentors are paired with junior high and high school students to provide guidance and support to the girls through the school year and to address their spiritual, social, emotional and academic struggles.

The goal is for the girls to become “S.T.A.R.S.” — strong, talented, amazing, responsible and successful.

McDaniel got the idea for the program while teaching a class at a McComb school. She was trying to explain the lesson but she felt like none of the students were listening to her. So she stopped and held a five-minute jam session to get to the heart of the matter. “They were saying that life was too hard, and that they didn’t have an outlet to speak.”

She said after listening to them — giving them a chance to achnowledged — they were empowered and worked harder on the lesson.

“I thought, ‘This is what these youth need,’” she said.

McDaniel said she prayed about it and asked God for guidance and how to move forward. The vision she said she received was to start a program for girls to provide guidance and support. She used her connections in Brookhaven and McComb and at Copiah-Lincoln Community College, where’d she’d taught for several years, and rounded up a group of mentors.

Participants in the program meet monthly at locations throughout Brookhaven for workshops dealing with various issues, such as phone and internet etiquette, dressing appropriately, self respect, dating, healthy choices and job interview preparedness. The first workshop planned in September is on credit and money management.

They choose programs based on suggestions from the girls. “They’ll come and tell us what they’re struggling with,” she said. “We take everyday issues that they face and that’s how we tailor the workshops. What I have found is that they don’t feel comfortable talking to their parents about real issues that they’re facing.” 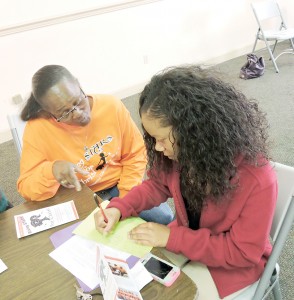 Photos submitted/Virginia Hamilton (left) helps Deoushanay Lewis complete a skill-building project during one of the monthly workshops hosted by Rising S.T.A.R.S. of Christ, a mentor program in Brookhaven.

The program also provides field experiences for the girls, like visits to museums and college campuses.

“These last couple of months, I’ve had parents calling me, asking when the kick-off will be,” she said.

McDaniel recalled one mother in particular who called her recently. “She said she sees all the good work we’re doing and she wanted her daughters involved,” McDaniel said.

While it’s aimed at girls 12-18, it’s open to young women as old as 24. The older girls are like mentors for the younger girls, she said.

McDaniel has several openings available for mentors in the program. The goal is for the women to work one-on-one with the girls, but because it’s growing so fast, they’ve had to double up, with each mentor taking the responsibility for two girls.

McDaniel said she’s received a lot of positive feedback since she started the program two years ago. One parent, a widowed father of a teenage daughter, said the girl didn’t listen to him before the program. “He said it really helped their communication,” McDaniel said. “Sometimes, it’s all they need, just someone to listen.”

While McDaniel said her vision was to create a program for young girls, her church, Rhema Word Worship Center in Brookhaven, is creating a similar program for young males. It’s called Boys to Men of Mississippi.

For information about the Boys to Men of Mississippi program, call Alvin Giddens at 601-810-8285.

Vehicles to be removed from vacant properties

Q: What will happen to the junked vehicles left at the abandoned properties the city plans to clean up? A: David Fearn,... read more