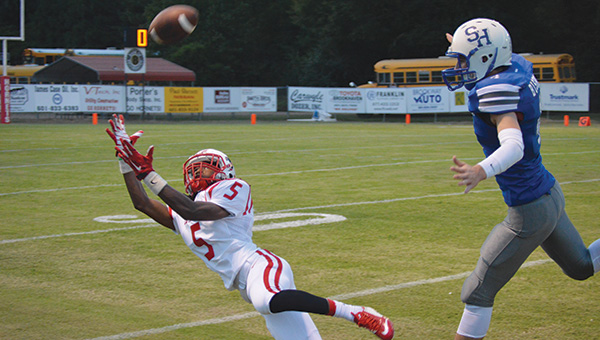 File photo/
PrimeTime 23 sophomore wide receiver James Beard stretches out to reel in a catch during a game last season.

Years ago, the Kansas City Chiefs had a player by the name of Dante Hall.

Hall was an average receiver by most standards but where he truly shined was on kick and punt returns.

It was there that Hall did things that at the time had not been done. He made moves that amazed and befuddled, leaving defenders falling over each other in his wake. Hall was truly ahead of his time.

Years later, the Chicago Bears would attain another player of this caliber. His name was Devin Hester and if Dante Hall created the mold, Hester broke it.

In his prime he was truly one of a kind. Hester made history by being the first player to return an opening kickoff for a touchdown in Super Bowl history.

Players like Hester and Hall are the definition of game changers. Every coach knows special teams is crucial to success in the game of football. When a team possesses a player who can place them in good field position after a solid defensive stand, it changes the dynamic of the game.

It gives the offense a short field to work with while also putting the opposing defense’s back against the wall.
Coaches salivate at true return specialists.

Fortunately for Loyd Star, they have James Beard and he happens to match the description of a return specialist to a T.

A second team All-State selection for the Hornets last season, Beard is fast, has good vision and the ability to make defenders miss in the open field.
Last season, Beard returned five kickoffs and one punt for touchdowns.

Beard played defensive back as well and caught two interceptions and managed to return one for a score.
At wide receiver, he  reeled in six touchdown passes on 23 receptions for 466 total yards.

The thing that stands out the most about that production is he did it as a freshman.
Despite playing in several positions for the Hornets, he said his favorite position is receiver.

“It’s the position where I can get the ball the most,” he said.
He added he tries to mold his game after his favorite player, Desean Jackson.

“Ever since I was younger he was someone I have always wanted to be like. I want to run like him, catch like him, everything,” he said. “I like Odell Beckham, too.”
Of all his returns, he said the punt return for a touchdown against Puckett in the first round of the playoffs is the most memorable.

“The ball fell around the one-yard line,” he said. “We were losing by a lot and no one picked the ball up so I got it and tried to make something happen.”

Ninety-something yards later, he accomplished that mission.
Running a 4.48 40-time,  his best attribute is his speed and in the open field he takes full advantage of it.

One of his finest games receiving last year was against West Lincoln. Beard had only two catches but made the most out of each one and ended up with 140 yards and two touchdowns on the night.

Beard is no slouch on the diamond either.
Playing left field and center, he led 2A in stolen bases and helped his team reach the state championship series.

Head coach Adam Cook said he feels Beard has a chance to be a special player for his team.

“James is ultra-talented,” he said. “He has unlimited potential to how good he could really be. I feel like he has a chance to be one of the better players to come through Lincoln County.”
Coming off a stellar year as a freshman, Cook also said he is excited to see how much Beard matures.

“As a freshman it is a bit intimidating to play against seniors,” he said. “But now that he is a year older, I’m excited to see if he will be more physically tough now that he has a year under his belt and has gotten a little bigger and taller.”

He also said he wants to see Beard tap into his competitive side this season.

“I want to see his competitive drive come on this year,” he said. “I want him to develop the mentality that no one will stop him once the ball is in the air.”

After reflecting on his success last season, Beard said he wants to improve on making tough catches in traffic.

He said his goals for the year are to catch 10 touchdowns receiving and return 10 kicks for scores. He said he would also like to catch at least five interceptions.
Though opposition may be a little less willing to kick to him in the upcoming year, one way or another Beard will find a way to the endzone.