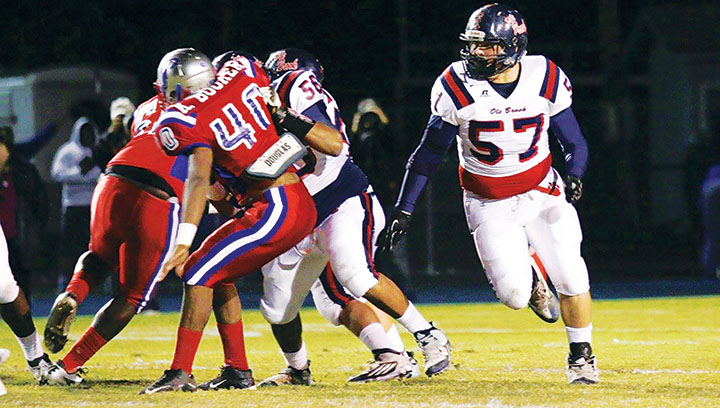 Photo submitted/
Brookhaven offensive lineman Trace Clopton leads a young Brookhaven team looking to get off to a fast start to begin the season after starting 0-6 in 2015.

The 2015 season got off to a tough start for the Brookhaven Panthers.
Facing some stiff competition and one of the toughest opening schedules  in 5A, Ole Brook went  0-6 out of the gate.

For junior offensive lineman Trace Clopton it will be something he never forgets and something he does not intend to allow to happen in 2016.

If residents of Brookhaven were to look at Clopton today as opposed to this time last year they may not  have some difficulty recognizing him.
Clopton started last season around 5-foot-11 and weighed around 245 pounds, but after a growth spurt he now stands at almost 6-foot-3 and weighs in at 295.

With a bench max of 305 and a squat max of 535, he also has the strength to match his frame as well.

With the help of that major growth spurt, he now has all the physical tools to dominate on the offensive front.

Clopton said the moment it all began to click for him at the position was during a tough loss against South Jones last season.
To the typical onlooker an offensive lineman pulling to make a big pancake block may not seem like a highlight reel play.

But when that block helps a running back break for a 40-plus yard run it becomes a little more significant. Then a  young, inexperienced sophomore Clopton said that play was when things began to come together for him.

“I always go full speed, but that was the first game I changed. That play was a big breakthrough for me. It was when I realized I had it.”

One of the best attributes Clopton possesses is not only his newfound size but also his versatility.
He is able to line up at any position on the offensive line, including center. He said center is the position he is most comfortable with and that he usually lines up at center during camps.

“The main thing I notice about him is his ability to finish downfield,” Powell said.“That’s what colleges look for and I believe it is what sets him apart.”

He added that Clopton’s best attribute is his toughness.
“He is a true offensive lineman. He isn’t afraid to get dirty. To him, the harder the battle the better,” he said.

Clopton should see time at defensive tackle this year as well, but said he prefers offensive line because he is more familiar with the position.
Even though Clopton knows offensive lineman is one of the less glamorous positions, he said what is most important to him is winning football games.

“I’m not going to be offended by it. It would be nice to run the ball once in a while,” he said jokingly, “but nothing matters to me but winning games.”
“I don’t care if my name is never in the paper,” he said. “If we win games,  I’ll be fine.”