Franklin’s Collins is a man of many talents 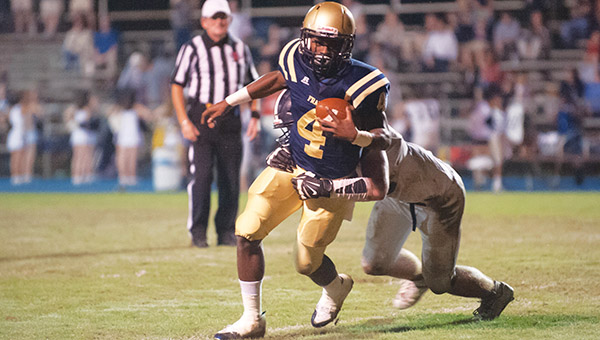 Football players at Franklin County High are held to a high standard. Though its last title came in 2006, the Bulldogs are consistently in the playoff mix and remain a threat to reach the state final every year.

Football players at Franklin County High with the surname Collins are held to a standard that is a little higher than others.
After all, it was Jamie Collins that brought that 2006 championship to Franklin. But he is not the only standout from the school that bears the name.

That same team had Dehendret Collins, who went on to play defensive back at Ole Miss and Brandon Collins.
Before that it was Robert Collins in the late 80s and early 90s.

Now, it is senior athlete De’Martre Collins. Unlike some of his relatives, it is hard to put this Collins into a particular position because he is liable to play any of them on any given night.
Last year he lined up at defensive back, wide receiver,  running back,  quarterback and returned punts and kicks.

If it is a skill position, fans are likely to see number 4 playing it.
Last season, he had close to 1,800 all-purpose yards and 16 TDs. At defensive back, he caught three interceptions.

“De’Martre is our best all-around athlete,” he said. “With the ball in his hands he is the deadliest kid we have and he has the most experience with the ball.”

Boasting blazing 4.3 speed, it is easy to understand why Collins would be that guy on any team.
If he had a choice, Collins said he would prefer to be classified as an athlete because of his versatility.

“I’ll line up anywhere man. I like playing receiver though because I can use my elusiveness,” he said.  “If I had the height I believe I could play quarterback.”

Whereas many would say his speed is what sets him apart from the rest, Collins said he believes his best attribute is his reaction time on the field.
He credits that to years of practice and game experience. Collins has been starting since his freshman year.

“Playing with other great players coming through has really helped me,” he said.
“I feel like I’ve seen it all, took the hardest hits, everything. I don’t feel like anything can stop me now.”

Naturally, the young Collins looks up to his cousin, NFL player and Super Bowl champion Jamie Collins. But, he said his favorite player and someone he tries to mold his game after is wide-receiver and speedster Tavon Austin.

“I see myself when I see Tavon. With his quickness and reaction time, his game is perfect and I’m just trying to get to that point,” the senior said.

Collins said his goals this year are  to score more than 30 touchdowns and lead the state in receptions.
He also wants to become a better receiver.

“I feel like I can make a catch that no one would expect me to make and then come back and miss a simple bubble route,” he said. “My hands are great but right now they are not where I want them to be.”

Collins currently has several offers to play at the next level but said he is still weighing his options and not trying to rush the process.
For him, it is  about playing time and going to the place he feels he can make the biggest impact immediately.

In the meantime, look for Collins to make a big impact for the Bulldogs in 2016 as they look to make a deep run in the 3A playoffs.

The Primetime 23 list is a compilation of the top 23 players in the area. The next member of the list will be revealed in Thursday’s edition.

OXFORD —  With preseason camp on the horizon, Ole Miss soccer has already earned national accolades, checking in at No.... read more