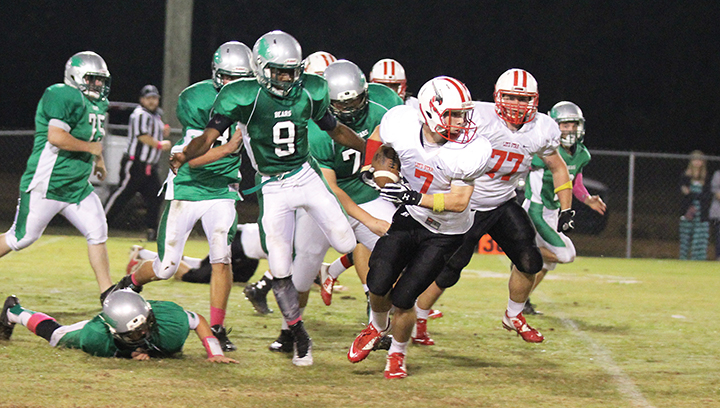 File photo/
Though he cracks the Primetime 23 at the linebacker position, Parker Flowers is a more than capable running back. Last season, he rushed for 1,028 yards and scored 22 touchdowns for the Hornets.

As the Primetime 23 list grows larger football fans in the area are  likely beginning to search for their favorite players.

Some of the more knowledgable fans may be engaging in “barbershop talk” about who should still be on the list or discussing a player or two that they feel should not have made the list.
There are many players in the area who may or may not be fringe Primetime 23 players, but during the compilation of this list there were also a few no-brainers.

Players who absolutely had to be on this list. Players whose 2015 statistics demanded they have a spot on this list.
Their absence on this list would not only be a knock on their overall abilities, but a travesty in and of itself.

When that caliber of player comes to mind on the defensive side of the ball, one name in particular stands above the rest when it comes to area players.
His name is Parker Flowers and his impact for the Loyd Star Hornets goes beyond the defensive unit. Flowers, like several of the other players on this list, did a little bit of everything for the Hornets last year.

On defense, he was a standout linebacker. The senior had 159 tackles and was named to the All-State first team for his efforts.

He was a valuable asset for his team on ofense as well. Flowers rushed for 1,028 yards and 16 touchdowns last season as one of the Hornets’ deadliest offensive weapons.
Although he is a quality defender for head coach Adam Cook’s defense, Flowers said he prefers to play on the offensive side.

During his All-State season he had several big moments that defined his season.  One of them came in a victory against Sacred Heart.

In that game Flowers and the Hornets managed to come back from a late deficit and take advantage of a missed field goal.
After regaining possession the Hornets drove down field and scored six, courtesy of a Parker Flowers touchdown pass, to tie the game.

When Cook decided to go for the two-point conversion to win the game, it was Flowers whose number was called.
He took the ball in for two to take the lead.

Later on defense, he would make the game winning sack  as time expired to seal the deal for his team.

“It was the game they were retiring my brother’s jersey so I felt like we had to win that game. I just wanted to give it all I had for my brother and for my community,” he said.

Another memorable play for Flowers was his 98-yard touchdown run against state powerhouse Bassfield.

Flowers found out from his coach later that it was the longest run that any team had managed on the Jackets in 15 years.
In a playoff game against Puckett, Flowers unfortunately suffered an ankle injury. But that didn’t stop him. Cook said it is a story he shares with recruiters to this day.

“He couldn’t put any weight on his ankle at the time. He went to the sideline and did what he needed to do in order to play and put pressure on his ankle,” he said. “He came back on a busted up ankle and played the rest of the game and threw three touchdowns.”

“I’m not the biggest or fastest or the strongest, but I believe hard work can outshine talent,” he said.
“If you work hard enough people will notice that quicker than they will notice raw talent.”

“He wants to play every position,” Cook said. “A lot of kids want to perfect one position but he wants to be the best at everything. I told him that is what he needs to be able to play at the next level.”

Flowers said his goals for the year are to rush for over 1,500 yards and  have a winning season.

The Primetime 23 list is a compilation of the top 23 players in the area. The next member of the list will be revealed in Friday’s edition.

Below are the most current reports on  fishing conditions of lakes in the area. Information courtesy of the Mississippi Department... read more