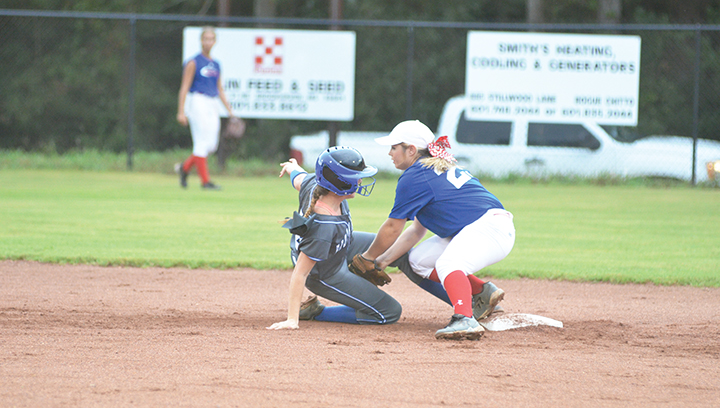 Pitching in the rain is a dilemma that even the most seasoned of pitchers would prefer to avoid.
However, sometimes they are forced to battle not only the player in the batter’s box but also the elements.

The rain can alter a pitcher’s movement, make the ball a bit harder to control and at points become downright frustrating. It is an unfortunate situation, but it is exactly the situation Madi Smith, Brookhaven Academy’s 13-year-old ace, was faced with early in the Cougars’ 15-4 loss against the Copiah Academy Colonels Thursday.

Smith allowed seven runs in that rain-drenched first inning. Despite the rough start, the young ace nearly went the distance for the Cougars. After the rain cleared, Smith went on to pitch five more decent innings and tallied two strikeouts and three walks.

However, the early deficit proved too much for the Cougars to overcome.
Smith’s head coach Becky Flowers said she was happy with the way Smith pitched despite the tough start.

“She just missed some spots early because of the rain,” she said. “But she worked hard and stayed with it. She will definitely be back on the mound for the next game.”

The Colonels had eight hits in the game, all of them singles. Baleigh Sifford led the way for the team with two.

The Cougars committed six errors on the defensive side to the Colonels three.

BA trimmed the deficit to three after a four-run third inning and seemed to be gaining ground on the Colonels heading into the latter portions of the game.

The contest was stopped for almost an hour after a set of field lights malfunctioned behind the visiting bleachers, sending sparks flying and bystanders ducking for cover.

“It’s hard for these young kids to stop and start like that,” she said. “I think we hit some balls into some good places, we just couldn’t get them through.”

After the stoppage, the Colonels scored a run in the fifth inning to go up 8-4.
The Cougars looked to still have some fight left, but a seven-run sixth inning sealed the victory for the visiting team.

Looking ahead, Coach Flowers said the lineup will not change drastically, if at all.
The Cougars will travel to Baker, LA., today for a contest against Central Private at 6:30 p.m.

After that game they head to Hattiesburg for the Columbia tournament Saturday.
Their next home game is slated for Monday versus Parklane. The contest will be their first division game of the year and a good barometer of how the rest of the district slate could shape up for them.

File photo/Though he cracks the Primetime 23 at the linebacker position, Parker Flowers is a more than capable running back.... read more