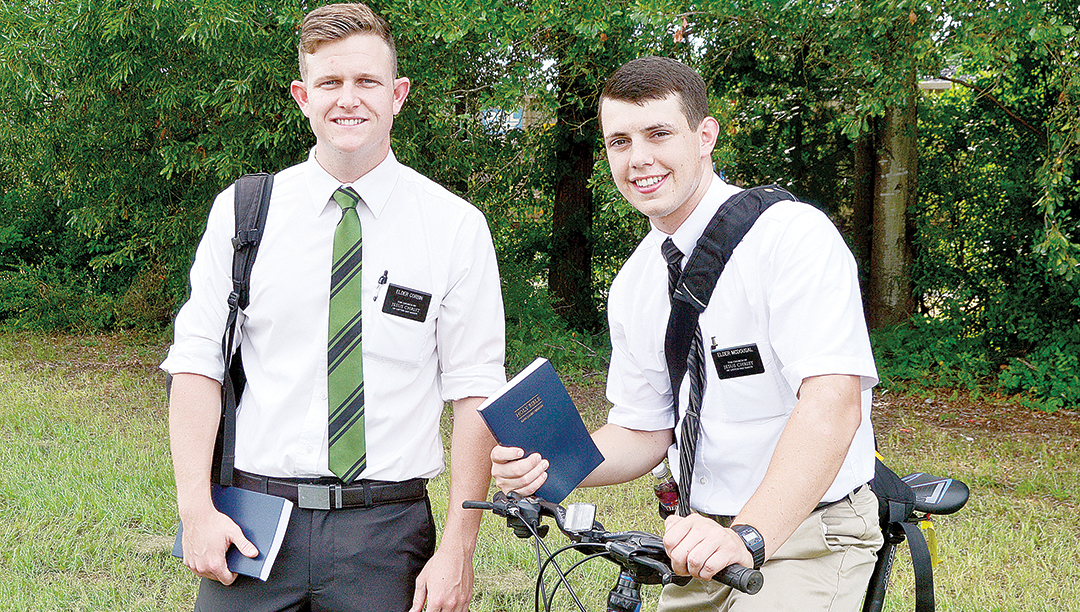 Photo by Donna Campbell/Elder Brenan Corbin (left) and Elder Joshua McDougal, missionaries in the Church of Jesus Christ of Latter-day Saints, can be seen regularly riding together through Brookhaven on their bikes, sharing their faith, giving away Bibles and doing community service for anyone who asks.

Joshua McDougal dug graves and sold his pickup truck so he could come to Brookhaven to share his faith.

Brenan Corbin bagged groceries and put off college for the same reason.

The two 20-year-olds are members of the Church of Jesus Christ of Latter-day Saints who are in Brookhaven as part of their two-year mission, an act of volunteerism that is encouraged by the church for young single men and women.

Total church membership in Mississippi is 21,770. Two LDS churches are located in Brookhaven, one on Mormon Church Road and another on Ingram Street.

God “wants us all to be unified in our faith,” Corbin added.

The church’s missionary program is one of its most recognized characteristics. According to the LDS website, the missionary effort is based on the New Testament pattern of missionaries serving in pairs, teaching the gospel and baptizing believers in the name of Jesus Christ, just like Peter and John did in the book of Acts.

“God told us to go preach the Gospel two by two,” McDougal said.

Currently, about 74,079 Latter-day Saints are full-time missionaries, serving in the United States and abroad. Most missionaries are under the age of 25, serving in more than 400 missions throughout the world, though retired couples without children at home also serve, according to the website.

Corbin hails from Corona Del Mar, California. He’s been in Brookhaven for three months, having served in the mission field already in Biloxi, Hattiesburg and Meridian and Shreveport and Monroe, Louisiana. He will end his mission Aug. 17 to return home.

His replacement will join McDougal in Brookhaven that same day.

McDougall, who turned 20 Monday, is from Safford, Arizona. He began his mission June 3 a year ago, so he still has almost another year to go.

The money they raise covers their living expenses for the two years, plus their regular tithes to the church — “10 percent, just like the Bible tells us,” McDougal said.

Members of the church volunteer to serve as missionaries at their own expense. For two years, they devote their lives to sharing their faith with others in whatever location church elders’ prayers and guidance sends them.

McDougal, who worked for his father, a funeral home director, said his parents didn’t push him to volunteer for a mission. He’s the youngest of five children and the only son, and the third of his siblings to go on a mission.

It wasn’t in his original life plan. “I thought I had life figured out,” he said. “I had the girl, the job and the truck,” he said.

But sitting on his tailgate one night, he thought about his family, which his faith tells him will be together in the next life. “I decided to give up two years so that I could find a family (to proselytize to) and they could be together,” he said.

“I can’t not go, and share what’s helped me, with other people,” Corbin said. “Ultimately, God wants us to be happy, and the only way to happiness is living the gospel of Jesus Christ, which has been restored through the prophet Joseph Smith.”

The two have been persecuted for their faith in the various places they’ve served. “A lot of hatred toward us,” McDougal said. “I’ve had a beer thrown at me.”

But not everyone shows them hate, especially in Brookhaven.

“People are very welcoming here,” he said. “This town has a special feel about it.”

He enjoys talking to residents during their daily treks through the city. “A lot of them have strong testimonies of God and Jesus Christ,” McDougall said. “A lot of them treat us just like family.”

As missionaries, they are on the “job” 24 hours a day, seven days a week, for two years.

A typical day for them is to wake at 6 a.m. to work out and get ready for their day. The church requires they adhere to a conservative dress code — dark pants, white dress shirts and ties.

They each have personal study from 8-9 a.m. from their King James Bible and the Book of Mormon, which Corbin explained is “written by many ancient prophets,” then they study together from 9-10 a.m.

Except for an hour break for lunch, they are on the streets from all day, knocking on doors, doing service for others and looking for opportunities to share their faith.

Monday is preparation day, when they catch up on laundry, email and phone calls to family and some kind of fun activity like basketball or fishing. Missionaries avoid entertainment, parties or other activities common to this age-group as long as they are on their missions, so they can focus entirely on the work of serving and of teaching others the gospel of Jesus Christ, Corbin said.

Service to others is a big part of what they do, and they’ll do practically anything that is asked of them — lawn work, roof repair, carrying groceries, assisting elderly and widows. Some of the manual labor is tricky for them, but they’re happy to serve, they said. “We don’t have skills in that area, but we have four hands that are willing,” Corbin said.

“We just want to serve people, to do what Jesus Christ would do, to serve,” McDougal said.

Corbin said his study of the religion has given meaning to his life and peace. “I know that I’m a son of God and I know we’re all brothers and sisters,” he said.

Corbin will be released from his calling later this month. He’s set to attend classes at Brigham Young University, a private research university owned by the Church of Jesus Christ of Later-day Saints in Provo, Utah.